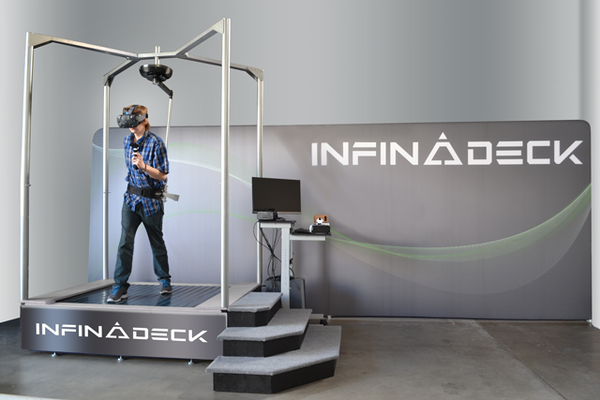 As always, the New Year is starting off with a bang for the technology industry as the 2016 Consumer Electronics Show (CES) gets underway in Las Vegas, Nevada on 6th January, running through to 9th. Virtual reality (VR) won’t be missing out on the event, with the HTC Vive head-mounted display (HMD) promising to debut a ‘very big breakthrough‘ at the show along with a number of other companies showcasing brand new hardware. Among these is a brand new omni-directional treadmill solution for VR experiences known as Infinadeck. A new image of the device can also be seen below.

Infinadeck aims to be the best treadmill solution that enables users to walk around within VR titles, competing with the likes of the Virtuix Omni and the Cyberith Virtualizer. It consists of two motors, one of which moves the platform on which players stand while the other shifts it in a perpendicular direction. It measures in at 4.4 foot by 5.6 foot and weighs 225kg, standing 16 inches off of the ground. A sensor array fitted to the device will pick up player’s movement as they walk forward, which the treadmill then moving to accommodate those steps.

“I created Infinadeck because I knew I could solve this problem (of how to walk in VR) better than anyone else,” device inventor George Burger said of the news. “The Infinadeck is the best solution for walking in VR. Other devices attempt to trick you into feeling like you’re walking; I wanted something that will let you walk in Virtual Reality like you would normally walk in reality. We’re going to CES so we can show the VR community that this is what we think the future of locomotion for virtual reality will be.”

VRFocus will be at CES 2016 to deliver the latest updates on all new VR technology.

The post Infinadeck to Demonstrate ‘the best solution for walking in VR’ at CES 2016 appeared first on VRFocus.