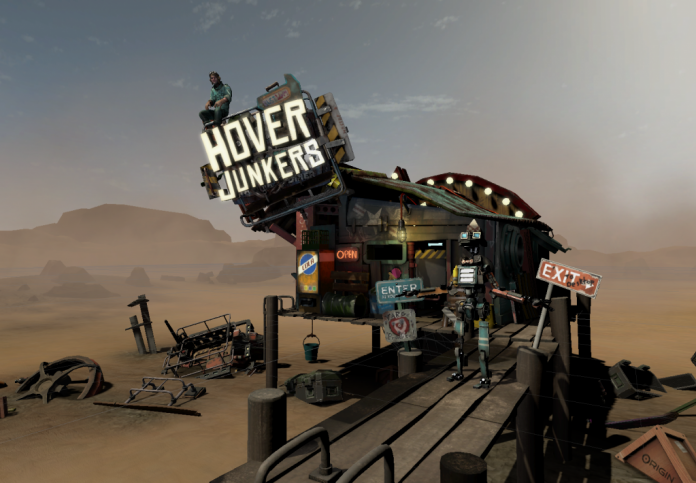 With the first half of 2016 set to be an exciting year for virtual reality (VR), with head-mounted display (HMD) releases for Oculus Rift and HTC Vive only a few months away, developers are gearing up with content to support these devices. VRFocus has reported on Stress Level Zero and its VR title Hover Junkers a number of times since its reveal back in June 2015. The developer has released a collection of dev blogs over the months and this week sees the launch of an IndieGoGo funding campaign.

While crowd-funding campaigns on sites like IndieGoGo and Kickstarter are primarily designed to help the developer with some much needed capital, either to bring the project to life or to iron out the final stages this isn’t the case for Stress Level Zero. The team have created the campaign to reward early supporters and those that have been requesting pre-orders, with the team saying: “We want to provide the community with special limited rewards for taking such an interest in the project!”

The goal has been set at $100,000 USD but even if that amount isn’t achieved the videogame will still be released with the launch of the HTC Vive headset in April. Stress Level Zero will also be releasing Hover Junkers of the Oculus Touch motion controllers around Q3/Q4 2016.

Hover Junkers is a first-person shooter (FPS) experience that allows players to pilot hovering platforms. These ships can be fortified with junk found on the map and players will use them to attack others. There will be single player and multiplayer modes, with multiplayer featuring both a co-op and competitive capacity, including free for all and team deathmatch modes.

The reward tiers for the IndieGoGo campaign start from $35 USD which gives supporters a Steam Key for the title, rising all the way up to £8000 USD, getting a custom built playable character hero based on you.

VRFocus will continue to follow Stress Level Zero’s IndieGoGo campaign, reporting back with the latest developments.