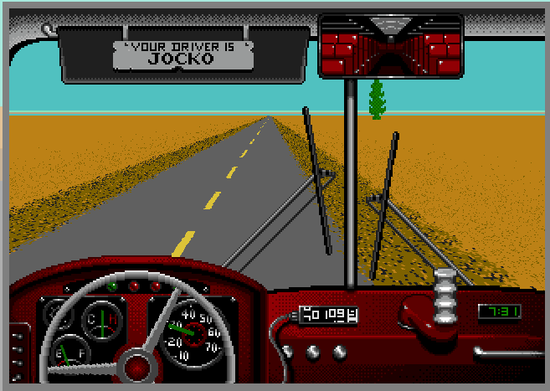 Virtual reality (VR) head-mounted displays (HMDs) will no doubt be home to some utterly strange and surreal experiences in the next few years. The indie community is already providing plenty examples of this, but it looks as if two high-profile figures will be producing a sequel to one of the most curious videogames in the industry’s history. Entertainer Penn Jillette has announced that he is working with Gearbox’s Randy Pitchford to produce a new version of Desert Bus, an officially unreleased minigame.

Jillette himself confirmed the news in the latest edition of his podcast, Penn’s Sunday School, as reported by Stevivor. “I’m working on a game with Randy Pitchford… and we are going to do – this is a big, big deal – we’re going to do a new Desert Bus,” Jillette said. “And it’s going to be just for charities, so charities can use it to raise money.

The original Desert Bus was part of a cancelled 1995 collection of minigames for the Sega CD named Penn & Teller’s Smoke and Mirrors from Penn and his entertainment partner, Teller. It tasked players with making the real time trip from Tucson, Arizona to Las Vegas, Nevada by driving a bus at 45mph over the course of eight hours. Make any mistakes and the player would be towed back to the starting point, again in real time. In the past, the experience has been used to raise money for charity with the ‘Desert Bus for Hope’ marathon.

Make note, however, that this doesn’t appear to be a full VR videogame from Gearbox, which is partnered with the Open-Source Virtual Reality (OSVR) ecosystem. VRFocus will continue to follow both this project and the developer’s latest work, reporting back with any further updates.