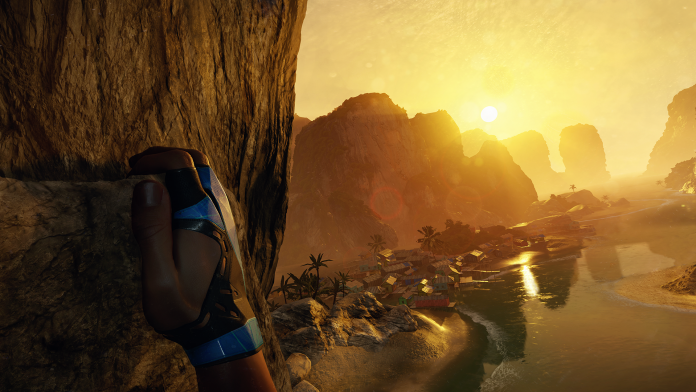 CryEngine creator and Crysis developer Crytek is currently busy working on two virtual reality (VR) projects. One of these is The Climb, a brand new rock climbing title that’s exclusive to the Oculus Rift head-mounted display (HMD). Even with the sense of vertigo that VR can deliver, you might struggle to picture how the team is creating an accurate, lifelike VR experience here, with the player’s feet rooted firmly on the ground. But, according to Crytek itself, even real climbers are ‘blown away’ by the realism of The Climb.

“We’re finding that when players, including people who have experience of climbing in real life, try The Climb for the first time, they’re just blown away by a sense of realism,” the company said in a recent blog post talking about its new project. “The feeling of being so close to the wall, the intimidating curvature of the cliff – you really get that sense of presence in the game when you put the VR headset on.  And it’s that presence that drives the tension, the adrenaline and ultimately the sense of accomplishment that lies at the heart of our vision for extreme free solo rock climbing.”

The Climb will launch with support for the Xbox One gamepad, which comes packed with every Oculus Rift unit sold. It will also be supporting Oculus VR’s position tracked controllers, Oculus Touch, which aren’t due to launch until the second half of this year. Outside of this title Crytek is also developing Robinson: The Journey, a first-person exploration experience that’s on its way to the PlayStation VR HMD on PlayStation 4 first. Little is currently known about the project, suggesting that the Oculus Rift title could be the first to arrive.

Stay tuned to VRFocus for the latest updates on Crytek’s work in VR.

The post Crytek: Even Real Climbers Are ‘blown away’ by Oculus Exclusive The Climb appeared first on VRFocus.