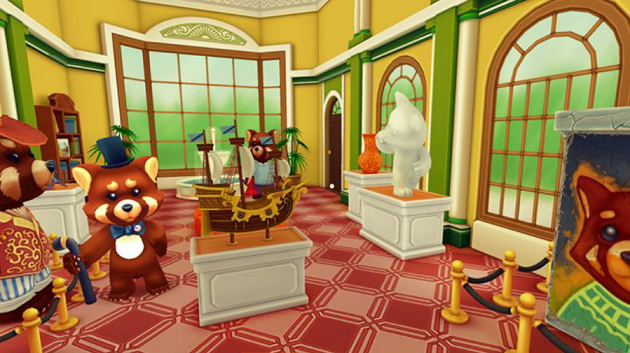 Developed by Maxim Miheyenko at the Oculus Mobile VR Jam for Samsung’s mobile virtual reality (VR) head-mounted display (HMD) Gear VR, House of Languages is a title that uses cartoon videogame visuals to teach languages. Since the Gear VR’s consumer launch more and more titles are now becoming available and now House of Languages has been added to that roster.

House of Languages has been designed to help users learn either English, German or Spanish. Placed in the virtual world with a cartoon animal named Mr. Woo, players can then look at objects within an environment, using the Gear VR’s head-tracking technology. As they study objects, players will be able to see their names as well as hearing Mr. Woo say them. Players themselves can then say the names and select the correct object using the Gear VR’s touchpad.

All the locations within House of Languages contain useful words that will help in real-life conversations, and there’s a review table with all the words from that location. To add to the experience there are several mini-games to play, such as puzzles and word guessing tests.

The title doesn’t require a gamepad and can be downloaded now. VRFocus will continue to follow any further VR projects by Maxim Miheyenko as further details are released.

The post House of Languages Launched on Gear VR appeared first on VRFocus.