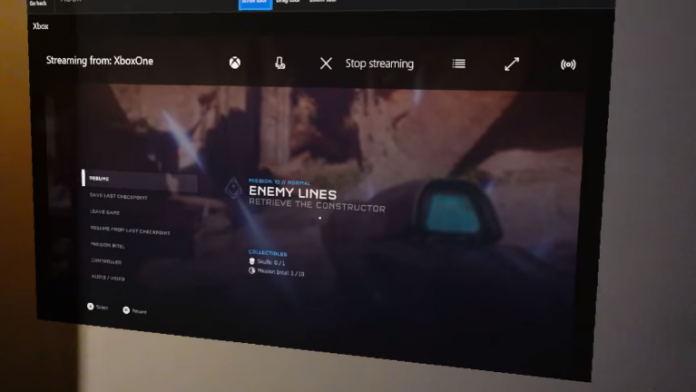 Microsoft’s first mixed reality (MR) head-mounted display (HMD), HoloLens, is set to release as a developer edition in early 2016. With its hefty $3,000 price tag, however, many assume that early iterations of the device will be aimed towards businesses rather than an entertainment device for consumers. Despite this, some intriguing videogames and other experiences have already been showcased for the device, including a new version of Minecraft. Now a Microsoft employee has revealed another potential application for the device; videogame streaming from an Xbox One.

HoloLens program manager Varun Mani has posted a video of himself (screenshots below) using the device to switch from playing the latest entry in the Halo series, Halo 5: Guardians, on a TV over to a virtual screen displayed on the HoloLens using the same Xbox One console. Mani is able to pause the videogame on the TV, turn around to a virtual screen and pick up right where he left off. As seen on HoloLens before, the screen can be dragged around a real world environment and even enlarged to play it on a display even bigger than the TV. Whether or not this application will be available in the development edition remains to be seen.

This could be a defining feature for videogame fans that are interested in HoloLens. Of course, this is far from the only Xbox One streaming that Microsoft offers, as gameplay can also be streamed to Windows 10 PCs and, through that system, even displayed inside a virtual theatre in the Oculus Rift virtual reality (VR) HMD. Applications for developers to pre-order a HoloLens are now open, with those successful able to lay down an early order in January 2016. The first shipments of the device will then be carried out in Q1 2016.

For the latest updates on HoloLens, Oculus Rift and all other HMD devices, check back to VRFocus. 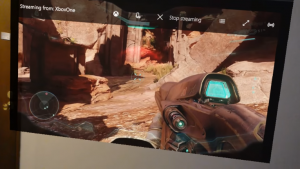 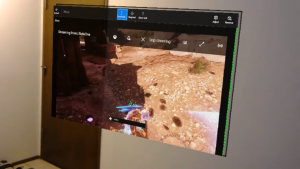 The post HoloLens Used to Stream Halo 5 from an Xbox One appeared first on VRFocus.