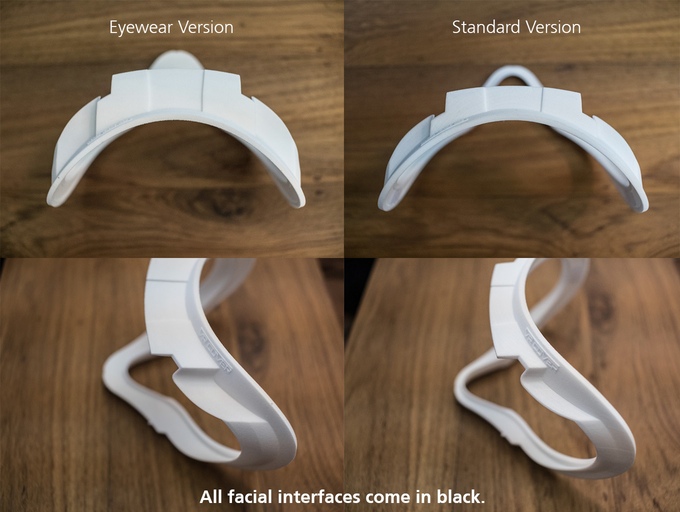 The one thing owners of virtual reality (VR) head-mounted displays (HMDs) will notice is that after extended periods of gameplay the soft foam padding can act like a bit of a sweat sponge. Not only that but the foam will eventually start to wear depending on use. So a couple of years ago Gauss Tech developed its VR Cover for the original Oculus Rift Development Kit 1 and 2 (DK1/DK2), providing a washable solution for gamers. The company then expanded its design creating foam replacements for Samsung Gear VR and HTC Vive. Gauss Tech has now launched a Kickstarter crowd-funding campaign for two new facial interfaces for the Oculus Rift, which hit its goal in 24 hours.

The two new interfaces were reverse engineered from the Oculus Rift itself, and the team even discussed the design with Oculus VR. There’s the standard version which will accept the two new padding options, and the Eyewear version specifically designed for anyone who wears glasses. With the Eyewear interface the design is deeper to comfortably accommodate glasses within the Oculus Rift.

With the padding Gauss Tech has designed a thin version enabling the eyes to be closer to the Oculus Rift lenses, which they claim will offer a wider field-of-view (FOV). While the second version is double the thickness, providing greater comfort for longer periods of wear. Both are constructed from memory foam and covered in a soft leather.

The funding campaign sort to raise €12,000 EUR and currently is on €14,860 are the time of writing with 28 days to go. There’s only three reward tiers available, a €29 option for one interface and foam pad, €58 gets you two interfaces and two foam pads, while for €145 there’s five interfaces with five foam pads.

The company does note that while only two foam designs are shown on the Kickstarter more options are being worked on, and will likely be available before shipping commences.

VRFocus will continue its coverage of Gauss Tech and VR Cover, reporting back with any new updates.