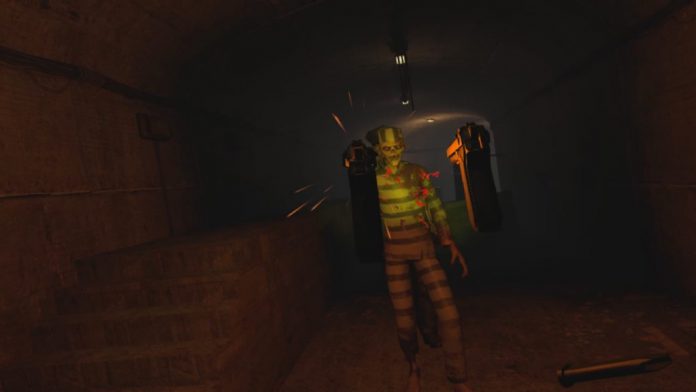 It was only six days ago when Smell of Death made its way onto the HTC Vive head-mounted display (HMD), and the gameplay explained by the developers seemed simple enough to follow, which only implied the challenges would be much harder than imagined. The call on how hard the gameplay really is can now be made with a gameplay video that has been released by Alkame Games showcasing each of the weapons and enemies.

The way the developers described the gameplay for Smell of Death was: “You know the rules and what to do. Don’t make much noise it cause them to come more. Be careful and make sure that you are safe. One shot to head is enough to kill most of them. Hurry up, complete your mission and come back.” The video below of the gameplay shows how this first person shooter (FPS) plays out, and the pace of the videogame overall may be a bit slower than anticipated.

The player can be seen using all of the weapons that are available in Smell of Death –  Baretta, Katana, and M4 weaponry, and it is said that there will be chances to expand guns with new updates. The enemies, also, seem to move at a slow pace, edging towards you as you look around the dark house, which is where this demo is set. As the number of enemies move towards the player, it seems as though the Katana is the choice weapon to use in order to slash down the zombies – just as it was shown in the video.

The title is currently available on Steam for £11.99 (GBP), and there is also an investment in future episodes open to consumers with Episode 1 and all future episodes for £18.99.

For more on this FPS as well as all the latest news and updates in the world of VR, make sure to check back with VRFocus.