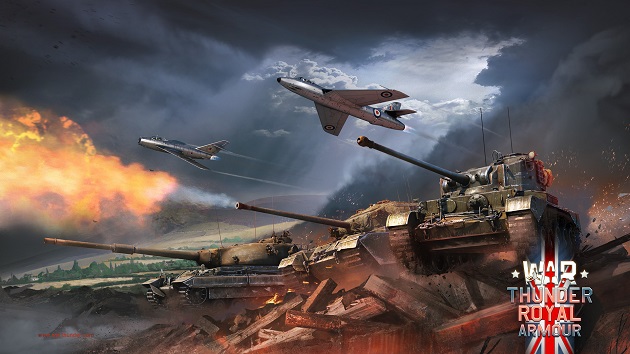 The Royal Armour update will feature thirty British tanks including variants of Valentine’s, Matildas, Cromwells and Churchills will be introduced with five regular and four premium tanks starting for British players. Then over the course of the next few weeks self-propelled guns will be added and the very first armoured cars in War Thunder in the form of the T172E2 and Mk.II AA.

As for the new playable maps, this update will introduce War Thunder’s first ever desert themed locations, Tunisia and El Alamein. The new maps should offer up a variety of challenging combat conditions from flat open ground with good visibility to undulating sand dunes and towns that allow greater close quarter battles and ambush environments.

Aside from the tanks Gaijin Entertainment is also adding more aircraft to War Thunder. These include Mig-17 Jet fighter, the most modern Soviet aircraft in the game, and three Japanese fighters consisting of the Ki-44-2, A7M2 and Ki-61 Tei. The F3F an American biplane will also be included, as well as new German and British bombers.

The full Royal Armour changelog can be found on the War Thunder website, and VRFocus will continue to bring you the latest announcements from the developer.