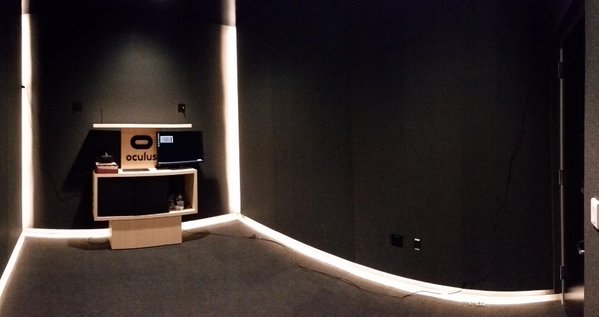 One of the main features of the upcoming HTC Vive virtual reality (VR) head-mounted display (HMD) is Room Scale user tracking, provided by Valve and its SteamVR system. This essentially allows players to put on the device and walk around a set area in real life, with those movements then being replicated within the given experience. This feature isn’t unique to the HTC Vive, however, as it’s also present – though much less touted – in the Oculus Rift HMD from Oculus VR. This week, kit creator Palmer Luckey has revealed the limits of its own user tracking.

Luckey took to Twitter to post an image of a room (seen above) in which he’d placed some of the sensors that support the Oculus Rift in different corners, which he noted ‘worked fine’. When asked by VR developer Robert McGregor about what this meant for VR’s tracking volume, Luckey replied: “It is limited by the room, not the sensors. Something like 15×11 feet.” That’s a little smaller than the HTC Vive, which has a cap of 15 feet by 15 feet, though neither system requires this much space to work, and can be scaled down to accommodate anywhere within that limit.

The Oculus Rift is set to arrive within the first three months of 2016, while we now know that the HTC Vive will launch the following April. The latter will include a pair of position tracked SteamVR controllers that give the user hand presence within VR, allowing them to reach into the world and interact with items in a realistic fashion. Oculus VR’s answer to this, Oculus Touch, will be arriving in the second quarter of next year, with the HMD being bundled in with an Xbox One controller in the meantime.

VRFocus will continue to follow both the Oculus Rift and HTC Vive closely, reporting back with the latest updates on both.