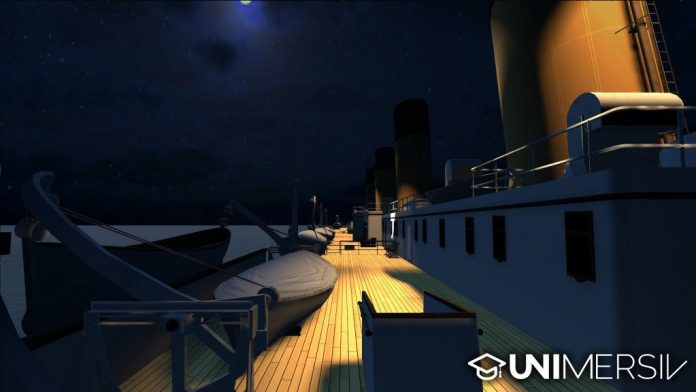 One of the most iconic ships that ever existed, RMS Titanic, known around the world for its ill fated maiden voyage in 1912 across the Atlantic, has been recreated in virtual reality (VR) by immersive educational company Unimersiv.

Available through its Unimersiv app on Samsung Gear VR, the Titanic experience lets viewers explore the ship as it was when it was first built. Head into the interior of the prestigious ship and see the original decor of the Reception Room or the Wheel House. Learn about the exterior of the ship that was claimed to be unsinkable, but due to the massive hole torn in its side by the iceberg the mechanisms to prevent disaster were useless. One of the best known facts, highlighted by director James Cameron’s 90’s movie, was that although RMS Titanic did have advanced safety features for its time it was seriously lacking in lifeboats.

While the Unimersiv app is free to download for the mobile head-mounted display (HMD), the Titanic experience only comes as an in-app purchase. If you’re interested in delving into the ships history you can purchase it for $1.99 USD.

Originally Unimersiv used to only distribute its educational content through its website, but back in May the company released its first dedicated app for Gear VR. It featured three experiences to sample. One takes place in space letting users access the International Space Station, the second takes you inside the human body and uncover what makes up the human anatomy. While the third goes back in time by 4000 years to Wiltshire, England, to wander round Stonehenge as it was originally perceived to look.

VRFocus will continue its coverage of Unimersiv, reporting back with any further updates.