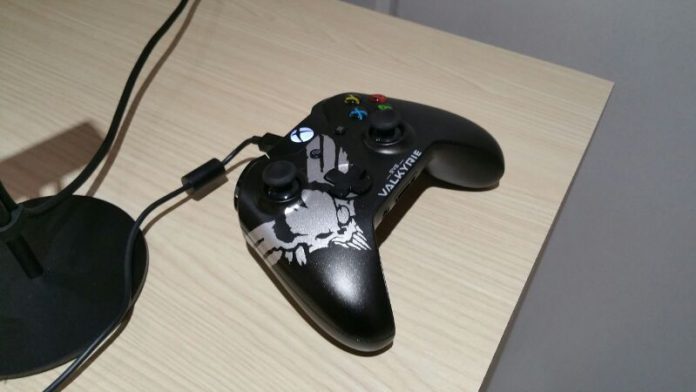 It might be a big day for the Oculus Rift virtual reality (VR) head-mounted display (HMD), which is now available to pre-order for $599 USD, but there’s also been plenty of news to share about one of its biggest titles, EVE: Valkyrie. We already knew that the multiplayer space combat title from CCP Games would be going free to anyone that pre-orders the Oculus Rift, but the developer has also announced the start date for Alpha testing stages today. On the show floor at the 2016 Consumer Electronics Show (CES) today is another surprise; an EVE: Valkyrie Xbox One controller.

Images of this new device, taken by VRFocus, can be seen below. It’s a black controller that’s decorated with an emblem from the videogame, in which players jump into the cockpits of space ships and take part in online battles set in CCP Games’ ever-popular EVE universe. CCP Games hasn’t yet decided when or how it will distribute the controller, suggesting that it wouldn’t be included with the pre-ordered versions of the Oculus Rift. That said, the HMD will include its own Xbox One controller, so you’ll be able to play the title right out of the box.

Oddly enough, EVE: Valkyrie isn’t actually appearing on the Xbox One itself, which must be something on a unique situation for a branded controller to be in. It is, however, coming to the PlayStation 4 with PlayStation VR support later down the line, though the HMD itself hasn’t yet received an official launch date before the H1 2016 window that was announced early last year. There’s no word on if there could be a DualShock 4 version of the decorated controller, either.

For the latest updates on EVE: Valkyrie, stay tuned to VRFocus. 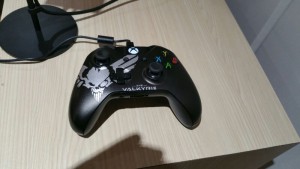 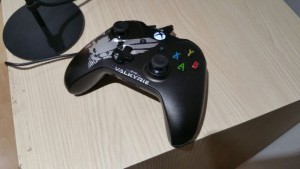