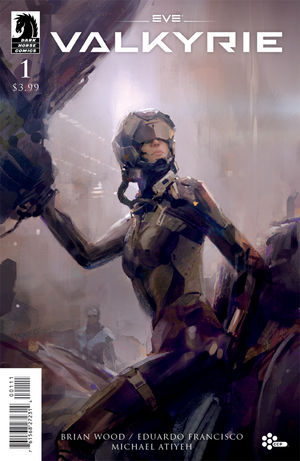 All the way back in May 2014 VRFocus reported that CCP Games had teamed up with comic book publisher Dark Horse to produce a new mini-series based around the team’s anticipated upcoming virtual reality (VR) multiplayer space shooter, EVE: Valkyrie. The comic was announced at last year’s edition of the EVE Fanfest fan event in Reykjavik, Iceland and has been in the works ever since. A year and a half on and – while EVE: Valkyrie itself may not be publicly available – the first issue of this series is.

EVE: Valkyrie #1 is written by Brian Wood – known for his work on Marvel’s X-Men and Moon Knight series among others – as illustrated by Eduardo Francisco, who has worked on the Mass Effect comic book spin-offs from the same publisher. The series follows Rán, founder of the Valkyrie space-fighter pilots, and leads into the events of the videogame itself. The second issue of the series is scheduled for release on 18th November 2015, while issue 3 should arrive on 16th December and the fourth and final entry will launch on 20th January 2016.

As for EVE: Valkyrie itself, CCP Games is currently accepting applications from players to take part in the title’s Pre-Alpha testing stages on PC. Hopeful players will need to own the Oculus Rift’s second development kit (DK2) to get in. It’s still not clear when the full videogame will launch, although this of course won’t be at least until the consumer version of the Oculus Rift arrives in Q1 2016. The experience is also on its way to that PlayStation 4 with support for the PlayStation VR HMD, which launches in H1 2016. It’s not yet known if it might arrive on the HTC Vive PC-based kit.

VRFocus will continue to follow EVE: Valkyrie closely, reporting back with any further updates on the title’s progress.