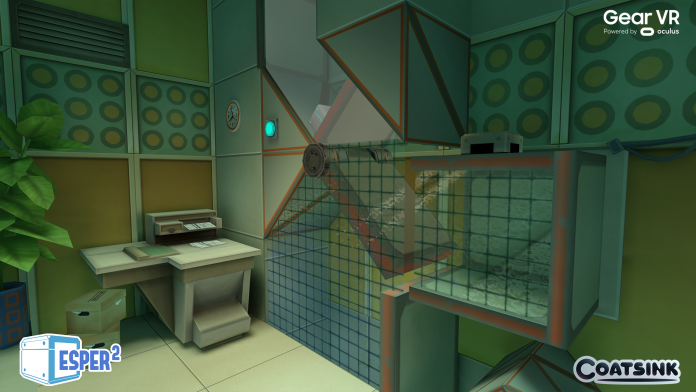 Virtual reality (VR) may be a young technology but UK-based indie studio Coatsink Software is already launching its second ever VR videogame today. That videogame is Esper 2, the sequel to the first-person puzzle title that launched on the Innovator Editions of Gear VR mobile-based head-mounted display (HMD) earlier in the year. The follow-up is also appearing on Gear VR, though arrives after the release of the full consumer version of the device, which is now available in a number of countries across the globe.

Esper 2 is an expanded take on the original title, in which players were tested for telekinetic abilities as part of the fictional ESPR programme. The first videogame was set entirely within a single room as Geoff, a member of ESPR, instructed players. Cast as the same character, the sequel will see you visit a wider range of locations from across the globe and meet more characters that are voiced by the likes of Nick Frost, Lara Pulver and Sean Pertwee as you attempt to stop a mysterious villain from obtaining an ancient artefact.

To do this, players will use their powers of telekinesis, which are simulated using the Gear VR’s head-tracking technology and on-board touch pad. This can be used to pick up objects and move them using the power of the player’s mind, and manifests in a number of different challenges that will have players navigating through mazes and more. Esper 2 costs $9.99 USD/£6.65 GBP and is available for all consumer Gear VR compatible phones (Galaxy S6, Galaxy S6 edge, Galaxy S6 edge plus and Galaxy Note 5) as well as the original Galaxy Note 4 for the initial Innovator Edition of Gear VR.

Elsewhere, Coatsink Software is helping Boneloaf to bring its multiplayer hit, Gang Beasts, to the Oculus Rift as well as porting the original Esper to the platform. For the latest updates on the studio, keep reading VRFocus.