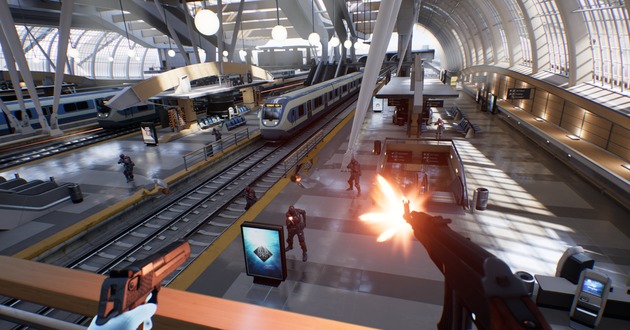 Epic Games has done more than enough to prove that it believes in the future of virtual reality (VR) technology. Along with making its popular Unreal Engine 4 development middleware compatible with head-mounted displays (HMDs) such as the Oculus Rift the company has also released a wide range of demos for the tech, including the most recent (and most impressive), Bullet Train. It’s no surprise, then, to hear studio founder Tim Sweeney predicts the next 5 years to be ‘utter churns and chaos’ for VR.

The developer said as much in a recent interview with IGN, first stating: “”I think it’s going to be most revolutionary change that’s happened in the history of computing.”

He later continued, explaining that the industry is currently at the start of 5 years of “utter churn and chaos. And it’s gonna be awesome, with the quality of the hardware doubling every year, you’re gonna want a new headset every year if you’re a serious early adopter.”

It’s no secret that companies such as Oculus VR plan to release multiple versions of their HMDs. The Oculus Rift, for example, will launch its first consumer edition in Q1 2016 but its creator has already confirmed that early work on its successor has already begun.

“By the time this hardware is able to reach a quarter billion users, at that point we’ll be on a more reasonable upgrade cycle,” Sweeney continued. “You might buy a new device every two or three years like a smartphone and not at the frenetic rate we’re at right now.”

Although many HMDs are now being deemed consumer-ready, there’s still a long way to go in terms of improving resolution, tracking and more to deliver the full VR experience. VRFocus will continue to follow Epic Games’ work in VR, reporting back with the latest updates on its progress.

The post Epic Games: VR’s Next 5 Years to Be ‘Chaos’, HMD Quality to ‘double’ Each Year appeared first on VRFocus.