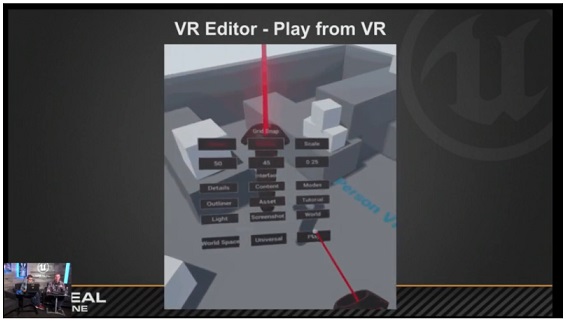 Earlier tonight Epic Games held one of their usual live streams, but this time it revealed plenty of details surrounding what virtual reality (VR) developers can expect from the upcoming release of Unreal Engine 4.13. As well as this, it was also revealed what UE 4.14 also has in store.

Although not much was shared about this feature, the VR Editor for 4.14 was teased, and it was mentioned that editing from within VR would be possible. This is a very advanced look into what UE4 has in store, and there is no doubt that after UE4.13 is released that this will be detailed more thoroughly.

As well as this, there were several other improvements and additions listed by Technical Director, Mike Fricker, and Community Manager, Alexander Paschall, proved to be a somewhat long list which will of course benefit developers in UE 4.13. These included: a VR project template for those who are creating a new VR project to skip over tedious steps to allow the user to transport as well as manipulate objects using correct physics; and increased rendering time by 10%, depending on which videogame you are playing.

As well as these two major points, there was also added texture and vertex shading, foliage painting tool, colour picker, transform gizmo, fashlight, screenshots, and a widget interaction component to determine how objects in the VR world get touched.

The two who featured in the live stream did allude to future work, which includes this latest reveal of a landscape editor, saying: “We’re experimenting with different types of interactions in VR, trying to make it more natural… some one-to-one stuff, but that’s for the future.”

For more on the latest from Epic Games on Unreal Engine 4, as well as all the news, updates, and features in the world of VR, make sure to check back with VRFocus.