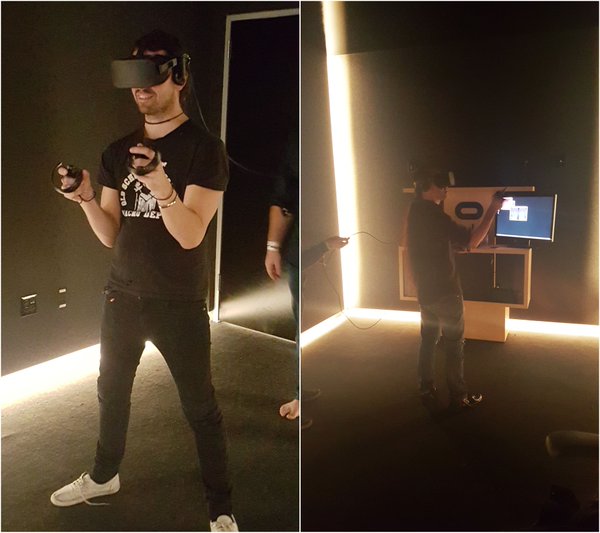 Last week Oculus VR enlisted the help of DragonForce to announce Rock Band VR, a new entry in Harmonix’s popular music franchise designed specifically for the Oculus Rift virtual reality (VR) head-mounted display (HMD). The company’s Palmer Luckey teamed up with the band along with members of Harmonix itself to shoot an amusing announcement video that first aired at The Game Awards 2015. Luckey, who showed himself to be a big DragonForce fan, didn’t stop there, however. Recently, the Oculus Rift creator also showed members of the band playing one of the kit’s most impressive demos.

Taking to Twitter, Luckey replied to an image from Nikki Moxxi (seen below) that showed members of the band playing around with the upcoming consumer version of the Oculus Rift and its position-tracked controllers, named Oculus Touch. Luckey’s follow-up confirmed that guitarists Sam Totman and Herman Li were playing none other than Epic Games’ Bullet Train. This is a first-person shooter (FPS) experience built on the company’s Unreal Engine 4 middleware that allows players to wield a variety of pistols, shotguns and grenades as they launch a one man army assault on a train station filled with enemy soldiers.

“It was awesome showing Bullet Train from @EpicGames to @HermanLi_ and @samdforce from @DragonForce!” Luckey said.

As for Rock Band VR, there’s still much to learn about the title, though it will also be using the Oculus Touch controllers, which can fit around the stock of the plastic guitars that players use in the videogame. This gives players a position tracked instrument that will help add to immersion as they strut around a virtual stage playing tracks as if they were part of a real rock band. It remains to be seen if other peripherals such as the drums and microphone will be supported and if tracklists from previous Rock Band titles will be compatible.

VRFocus will continue to follow Rock Band VR closely, reporting back with the latest updates on the title.