With the PlayStation Experience now over, the rest of 2015 is event-free for the virtual reality (VR) industry. Of course, there isn’t much of the year left, and it’s only four weeks to the day until the next major tech show, the 2016 Consumer Electronics Show (CES), gets underway from 6th – 9th January in Las Vegas, Nevada. Oculus Rift creator Oculus VR will be at the event once more this year and, from the looks of a recently discovered show floor plan, it looks like the company will have a huge presence.

Reddit user VRising first uncovered the floor plan, and there are images of Oculus VR’s booth below, 26002. As can be seen, the booth is one of the biggest in the entire event and easily dwarfs anything else in the Gaming and Virtual Reality section in which it is located. This is hardly surprising given that the consumer version of the Oculus Rift head-mounted display (HMD) should hopefully be weeks away from launch by the time CES rolls around, with a release still promised to take place sometime in Q1 2016.

It’s not clear if the company will have any announcements to make at the event, though fans are still waiting on the launch of pre-orders for the Oculus Rift, which should also unveil details such as pricing. Oculus VR has made big debuts at the show before, including the reveal of the Crystal Cove prototype kit that would go on to form the foundation of the second development kit (DK2) all the way back in January 2014. This year, the company used the show to talk about its work with its audio software development kit (SDK).

VRFocus itself will be at CES 2016 to bring you all the latest coverage of the Oculus Rift and any other VR tech. 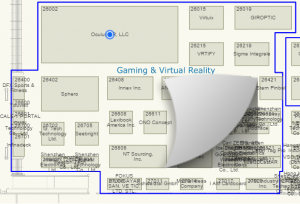