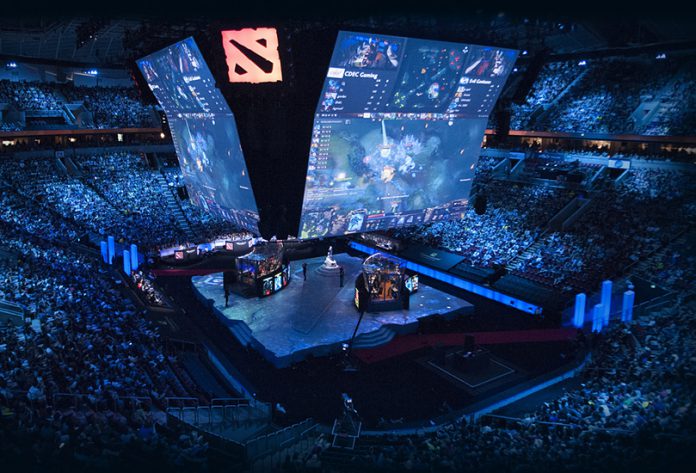 One of the biggest eSports titles going is Valve’s Dota2 which regularly holds arena filling events featuring players from across the world. The company has today released The International Compendium Update allowing fans of the title to interact with the upcoming tournament, with one of the features being virtual reality (VR) support for the HTC Vive.

In the update there’s the Dota VR Hub which allows viewers to watch live matches, replays, and streams in a VR Theater and view a gallery of the heroes in the VR Hero Showcase.

With the VR Theater you’ll be able to watch the matches on your own, with up to 15 friends or part of the community with a giant screen surrounded by full-size avatars of the heroes on the battlefield. With this experience there’s a range of functionality available to get into the heart of the action. You’ll be able to bring up a minimap to select a point on the battlefield, jump into the game world then teleport about at ground level while war rages all around you. There’s also the option to change the camera height to get a better overall viewpoint which can then be moved around to pick a choice location to watch the unfolding carnage.

The compendium also includes the Fantasy Challenge by unwrapping your 15 Player Card Packs to stack up a roster of Dota elite. You can then fill out a Bracket Prediction to predict the course of the event and make Tournament Predictions. When the tournament commences, make in-game Battle Predictions during live matches of The International unlocking a new set of achievements.

Valve has listed the full schedule as follows:

This isn’t the first time VR has been tried at an eSports event. Wargaming.net’s World of Tanks tournament which took place in Warsaw, Poland in April featured a similar idea, although not on the same scale. That event wasn’t streamed online, and the VR section only featured streaming from players not involved in the World of Tanks final.

As the worlds of eSports and VR start to merge, VRFocus will bring you the latest announcements.