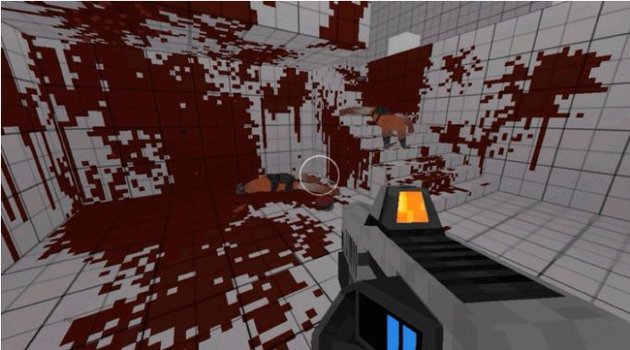 Early last year indie developer Pixel Titans closed out a Kickstarter crowd-funding campaign for a brand new first-person shooter (FPS) named STRAFE, raising some $207,847 USD for the project. The amount of money raised also meant that the team would work to incorporate support for the Oculus Rift virtual reality (VR) head-mounted display (HMD) into the experience. It’s since been a quiet year and a few weeks for STRAFE but, today, Devolver Digital has announced that it has partnered up with Pixel Titans to publish the title.

STRAFE is designed as a fast paced FPS that’s inspired by the likes of Quake and Doom in both its mechanics and the buckets of gore that players will spill. The title features randomly generated levels with a variety of rooms, enemies, power ups, secrets and more to uncover, with the location of each switching up with each new life. Four different types of zone feature that are said to cater to different gameplay styles, and players will be able to upgrade their guns, with over 30 different types of weapon featuring.

Crucially, the announcement reconfirms that STRAFE will still be supporting the Oculus Rift when it launches on PC in early 2017, though there’s no mention of if it could also come to the HTC Vive, nor if a PlayStation 4 port with PlayStation VR support is possible.

For the latest on STRAFE, keep reading VRFocus.