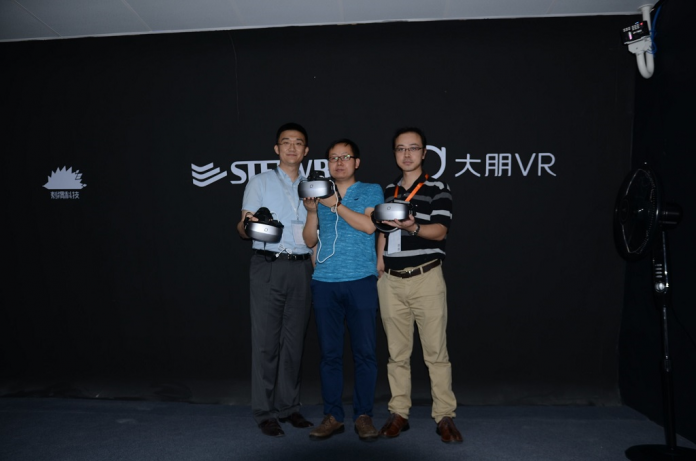 One of the main benefits of the higher-end virtual reality (VR) head-mounted displays (HMDs) like Oculus Rift, HTC Vive and PlayStation VR, is that they all feature positioning systems that can track a user in an allotted area. Being able to detect height and depth allows greater immersion in a virtual world, and its one thing mobile headsets lack. Smartphones that are suitable for VR HMDs like Google Cardboard include a gyroscope to detect vertical and horizontal head movement but nothing else, so companies have been looking at various methods. Chinese VR company Deepoon has now announced the creation of its own system, created in collaboration with G-Wearables.

Deepoon’s mobile VR positioning system takes the same approach as the HTC Vive Lighthouse setup. Whereby base stations are put in place that utilise laser technology to track a user.

In a statement the company explains: “Each station contains two completely orthogonal ultra-high precision motors, which have a sync deviation no more than 0.02 degrees and drive the 830 nanometer of laser to scan the targeted space. The frame rate of data update is as high as 240 Hz. All the above has enabled a precise localization. All a tester needs is an integrated VR model to move freely inside the targeted space and each point will be positioned automatically with a deviation within 1mm.”

But that’s not all as the system can supposedly track multiple users in the same space, allowing for local multiplayer interaction. This is achieved with a secondary system called ‘inertial navigation’ for relative localisation, so that when someone blocks one of the lasers the system still knows where you are. By the sound of it, there’s something built into the HMD to allow this, although the company hasn’t gone into further details.

The system was first shown at the Connect Eco-strategy Conference and a product release is coming soon, although no dates have been given or what markets are likely to see the system.

This isn’t the first time VRFocus has seen a mobile VR positioning system for Gear VR. Back in January at CES in Las Vegas IndoTraq announced its own kit. This comprised a device which attached to the headsets strap and used wireless tech rather than lasers, providing an indoor tracking distance of 100m, even through walls.

The real goal for mobile VR is inside-out tracking, whereby no external equipment is needed, with the process handled by just the smartphone and headset. Currently though, this does seem a long way off. As Oculus VR’s CTO John Carmack said back in May: ‘don’t expect general purpose position tracking to show up as a software-update feature for existing GearVR systems.’

For all the latest VR news from around the world, keep reading VRFocus.