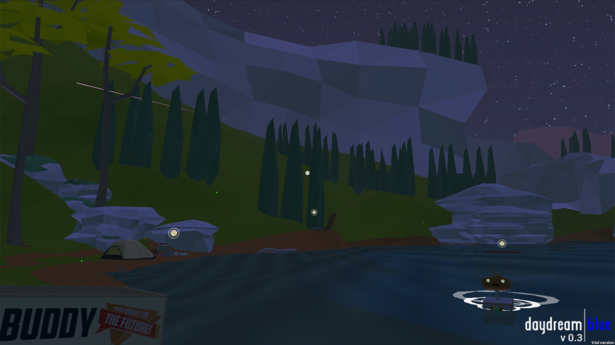 Earlier this month VRFocus reported on the launch of Daydream Blue, a new virtual reality (VR) experience for the Gear VR mobile head-mounted display (HMD) that had previously won a Gold award in Oculus VR’s official mobile jam. Developer RalphVR launched the title after a showcase at last month’s Oculus Connect 2 developer conference in Hollywood, California. This week the company is releasing its first major update for Daydream Blue as well as sharing some encouraging sales data about the experience.

According to RalphVR, Daydream Blue has remained the top-selling Gear VR app since its initial launch. Granted this is before the release of the true consumer version of the kit in November 2015, but this will still count for every one of the Innovator’s Edition units that have been sold since December 2014, working with both the Samsung Galaxy Note 4 and Galaxy S6 and S6 edge smartphones. It was also revealed that players have so far spent over 130 hours within the game world.

As for the update, the major addition here is a new mini-game that’s named UFO’s Descending. Elsewhere players will find new items to purchase for their house, support for compatible gamepads, optimisations to the title’s overall framerate and other bug fixes. Future updates will have new items, new games and news areas for players to discover.

VRFocus will continue to follow Daydream Blue closely, reporting back with the latest updates on the title’s progress.