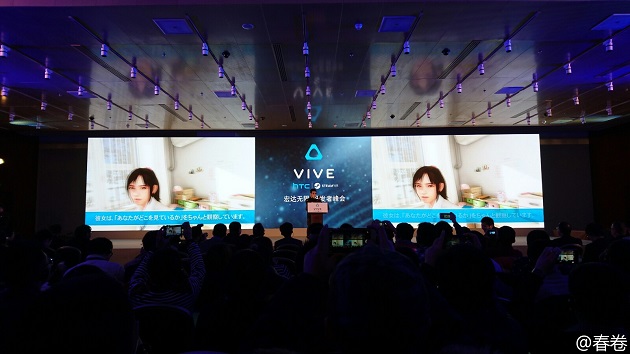 Summer Lesson a Bandai Namco Entertainment virtual reality (VR) title exclusive to PlayStation VR on Sony Computer Entertainment’s (SCE) PlayStation 4, might not exclusive after all. At the recent HTC Vive Developer Summit held in Beijing, China last week Bandai Namco producer Katsuhiro Harada held a half hour talk at the event, in which its claimed Harada has confirmed support for the HTC Vive head-mounted display (HMD) and SteamVR.

While details are currently thin on the ground, Niche Gamer reports that Harada has confirmed Summer Lessons support for the PC-based headset. Currently there’s been no official confirmation from either HTC or Bandai Namco, but in the image below posted on 4chan it shows the producer on stage with screenshots from the videogame either side of him.

The screenshots don’t definitively confirm support, as they could’ve been used for example purposes, but the inclusion at the event does raise some interesting questions.

Summer Lesson is a ‘communication simulator’ designed to use a VR device’s head tracking to allow players to nod or shake their heads to questions the videogames characters ask. The actual likelihood that Summer Lesson will ever receive a commercial release outside of Japan is slim though.

The summit has so far revealed the new HTC Vive logo, and leaked images of a possible new form factor for the HMD and its motion tracked controllers. VRFocus will continue to keep you updated on the latest developments for HTC Vive, and the possibility for Summer Lesson supporting the HMD.

The post Could Summer Lesson be Coming to HTC Vive? appeared first on VRFocus.