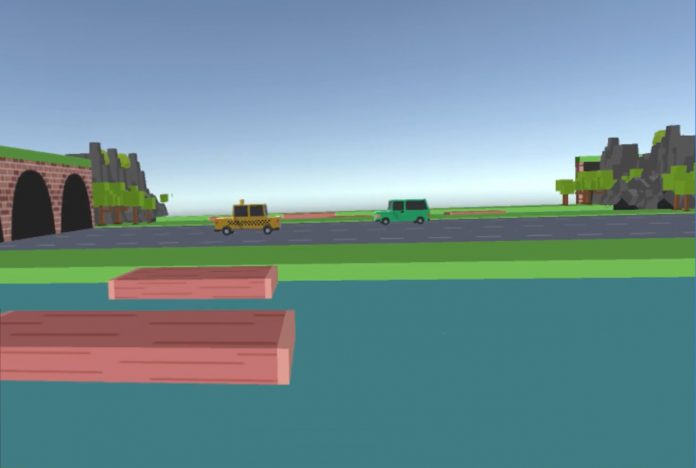 At some point in life Frogger has made a debut in peoples’ lives, whether it be the original arcade videogame, PC simulation, or any kind of adaptation of it. Now it has come to virtual reality (VR) with the title VRogger, developed by the same studio as Holodaze, now Greenlit on Steam for the HTC Vive head-mounted display (HMD), and it appears to give the title an interesting twist of gameplay and control.

As this is one of the most familiar arcade experiences, it should be a rather straight forward title to explain. The player is a frog with a mission to travel across two very different types of obstacles in order to reach its home on the other side, one being a busy road with cars coming at fluctuating speeds, and the other a river with logs that pass down through it for the player to jump on to and hopefully work their way across to the other side. However, if you are prone to motion sickness, it has been said there is also a teleportation option.

Before now, the title has typically been rather impersonal and there has been a lack of care for the somewhat suicidal frog’s journey, but with VRogger the player becomes the frog. Using the HTC Vive’s room scale motion detecting, the player can physically jump in order to advance across the dangerous path, with cars appearing to really come towards you and the threat of jumping into water immediately apparent.

On Sysdia Games’ Greenlight page, the developer explains the title’s appeal: “So, if you’re one of those people who want to experience the thrill of being….well…..a frog, jumping across the road, or traversing a river (not swimming! even though frogs can swim, but shhhh!) then this game is for you!!…..maybe?”

VRogger is still in development, as Sysdia Games stated that “This is actually a fully working game, I would just like to add more features to it, like achievements, leaderboards, etc.” It is also currently unclear when this title will be making its way to the Steam Store, and so VRFocus will keep up to date on its development.

For more of the latest VR titles like VRogger to come to Steam, as well as all the news and updates in the world of VR, make sure to check back with VRFocus.