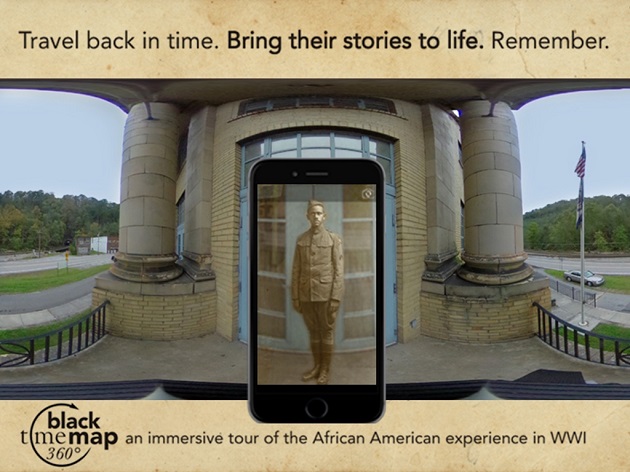 A new Kickstarter crowd funding campaign was launched this week by Professor Joel Beeson and his students at West Virginia University Reed College of Media. The project is looking to raise funds for a virtual reality (VR)/ augmented reality (AR) app that lets users experience the stories and history of the African American experience during WWI. BlackTimeMap is being built in partnership with Congressional Black Caucus Veterans Braintrust.

BlackTimeMap aims to open a window into these soldiers’ time serving in WWI, to make sure their stories are told, their service is honoured, and that the history lessons of their time are not lost. Using both VR/AR the app will transport viewers to physical memorials and back in time to WWI, and on location, either virtually or physically, visitors will be able to upload their personal stories, media, oral histories, letters and more to a virtual “wall” at the memorial site to add to the cultural and historical record.

“The black veterans of WWI returned home to become foot soldiers for civil rights in America. The WWI black experience was the beginning of the modern civil rights movement. If we don’t learn from the past how social and economic distress served to divide us, we are bound to repeat this cycle,” Beeson said.

The app will launch during the U.S. WWI Centennial in 2017 and is endorsed by the WWI Centennial Commission. It will be available as a free download on Android and iOS devices. The project aims to raise $20,000 USD in the next month.

VRFocus will continue to report on the latest Kickstarter project featuring VR and AR technology.