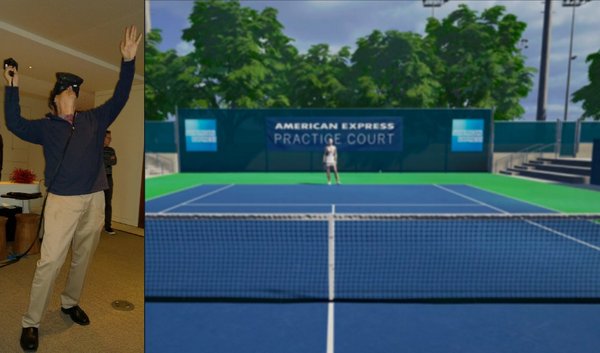 Microsoft may not be working directly with virtual reality (VR) technology at the moment but its interest in it is certainly obvious. The company has a partnership with Oculus Rift head-mounted display (HMD) creator Oculus VR that will allow Xbox One owners to stream into the device and play in a virtual theatre, for example, and work with Valve and its SteamVR system has also been announced. Today sees company co-founder and former-CEO Bill Gates try out the first SteamVR HMD, the anticipated HTC Vive.

Gates recently posted an image of him playing a virtual tennis match using the Vive and its SteamVR position-tracked controller, as seen below. According to the message accompanying the image, Gates was playing against a virtual version of Russian tennis player, Maria Sharapova.

“Got to sample VR breakthroughs, including the chance to return @MariaSharapova’s serve,” Gates wrote. “Very cool.”

The HTC Vive itself is set to launch in a limited fashion in the remainder of 2015 though it’s not yet clear just how many units will be launching then. A full rollout is expected in Q1 2016. A price for the device is yet to be announced.