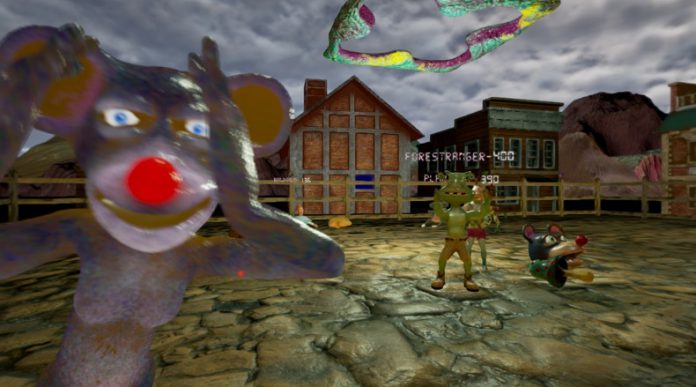 Last week in Miami, Florida, Art Basel staged one of the world’s premier modern and contemporary art fairs. A driving force in supporting the role that galleries play in nurturing the careers of their artists, Art Basel expands its platforms to include the newest developments in the visual arts. For the fair  held an art party at the EDITION Hotel featuring a virtual reality (VR) pop up curated by Louis B James gallery and Half Gallery.

The installation Beyond Basel Beach featured a number of wall mounted paintings, video animations, an interactive plant that controls a video when touched, and the centre piece was a VR experience using an Oculus Rift head-mounted display (HMD) that could be viewed by the surrounding audience.

“I wanted it to be a sort of refuge where you can stumble into it while you’re roaming around Miami Beach,” said Couillard to The Creators Project. “I like packing as much into my work as possible. It’s almost like a zip file, if you decompress it you get a whole bunch of separate but related elements,” he added.

And Couillard’s VR project wasn’t the only one there, as VRFocus previously reported on Cry Out: The Lonely Whale Experience would be debuting at the fair for the event “A Response to our Oceans”.

VRFocus will continue to report on VR’s many applications as creative minds explore new ways to utilise the technology.