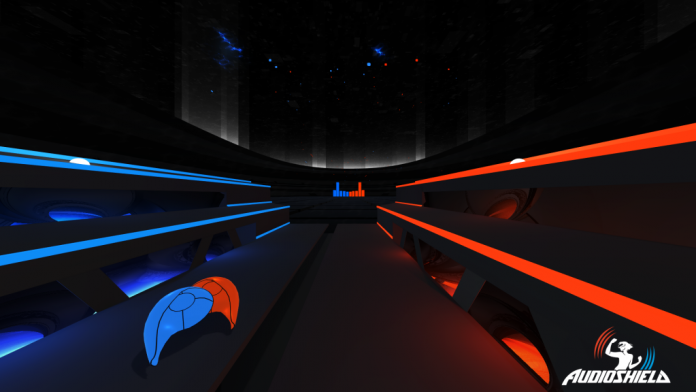 With the Steam VR Developer Showcase, held in Seattle, Washington almost at an end new information on the videogames on show is still being revealed. The event has featured 12 third-party virtual reality (VR) titles for the HTC Vive head-mounted display (HMD) one of them being Audioshield by Dylan Fitterer, the developer of the Audiosurf series. Its now been announced that the title will be part of the launch line-up.

While full details on Audioshield are yet to be revealed the software will use a modified version of Audiosurfs algorithm. As Audiosurf is a music-adapting puzzle racer where you use your own music to create your own experience, Audioshield will most likely feature similar gameplay mechanics, only now in VR. The shape, the speed, and the mood of each ride is determined by the song you choose and it’ll work with any track.

Only one screenshot has been unveiled for Audioshield which shows a similar futuristic neon design to Fitterer’s other projects, but it’s difficult to ascertain the full scope of the title with this single image.

The HTC Vive headset, made in partnership with Valve features a room-scale tracking system called Lighthouse that is able to detect the HMD and the two wireless controllers in an area up to 15 feet by 15 feet. The recent redesign for the HTC Vive Pre developers kit has made the controllers more ergonomic and the Vive itself slightly smaller. Pre-orders for the headset are due to open in February 2016, with the first shipments taking place in April.

VRFocus will continue to bring you the latest updates to Audioshield as the developer prepares the title for the HTC Vive launch.