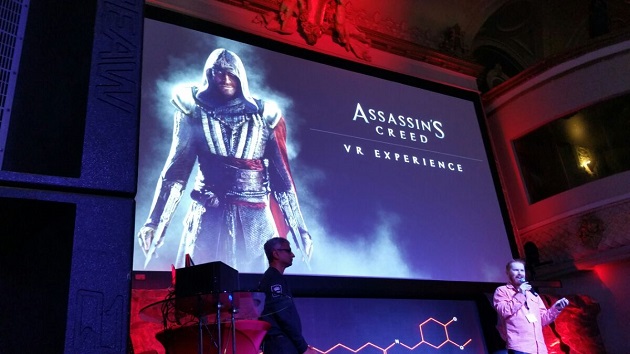 Having just found out Ubisoft would be revealing a new virtual reality (VR) title, VRFocus can now report its not a videogame but a cinematic experience. Announced at a press conference at the Game Developers Conference (GDC) 2016 today is the Assassin’s Creed VR Experience.

Taking the stage was Matthew Lewis, President, Practical Magic VR & Director of VR Experiences who revealed that the project was: “A cinematic VR experience being shot alongside the film, in every location.” Lewis continued, saying: “We’re working really hard to create a VR experience that’s on par with the motion-picture experience.”

That sure to excite fans of VR and of the Assassin’s Creed series which has a big following of gamers around the world. Details on the experience’s storyline haven’t yet been revealed, whether it’ll follow the movie, as the locations are the same giving a different viewpoint or an intertwining story that unveils other aspects.

Assassin’s Creed VR Experience has been confirmed to be arriving on head-mounted displays (HMDs) later this year although which ones haven’t been confirmed yet.

VRFocus will continue to follow the progress of Assassin’s Creed VR Experience, reporting back with any new updates.