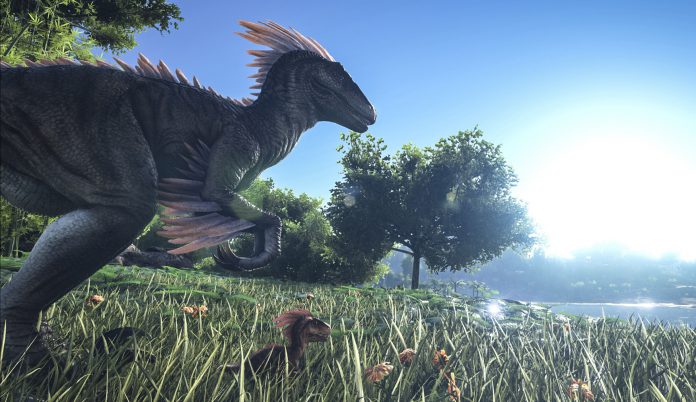 Last year saw the announcement and launch of a pre-release version of an ambitious new virtual reality (VR) compatible videogame known as ARK: Survival Evolved. Developer Studio Wildcard even released the Early Access edition of this first-person experience with experimental support for the Oculus Rift head-mounted display (HMD), which can still be sampled today. But, with a massive open world, deep online integration and a range of enormous dinosaurs included, some fans are worried the full version of the title might not live up to the powerful performance needed for a comfortable VR experience. Recently, Studio Wildcard itself has commented on its VR plans.

Speaking with GameSpot, studio co-founder and Creative Director Jesse Rapczak noted that the team hopes to have a ‘pretty good VR solution’ integrated for launch later this year. “Yeah we definitely have plans for VR; Oculus support is currently in there, it’s been in there, we just used it last week when we were reviewing something,” he said. “We do plan to have at least a pretty good VR solution implemented when we hit our final launch after we redo our user interface and everything like that to make it a little more VR-friendly. We’ll have that in there for PC for sure.

But what about the PlayStation 4 version? According to the developer, support for PlayStation VR is still planned. “On PS4, we’ve announced more Morpheus support so we’re looking forward to that as well. As far as AR goes, no specific plans yet; there’s a lot of stuff we could do but I think that’s a little bit further behind, even VR, when it comes to commercial adoption so we’ll probably kind of wait and see with that to see when the right time is to think about it,” Rapczak concluded.

ARK: Survival Evolved is expected to make its full release around mid-2016. If it will be able to bring its performance up to scratch for VR remains to be seen. Stay tuned to VRFocus for the latest on the project.

The post ARK Dev Aiming to Have ‘a pretty good VR solution’ for Full Launch appeared first on VRFocus.