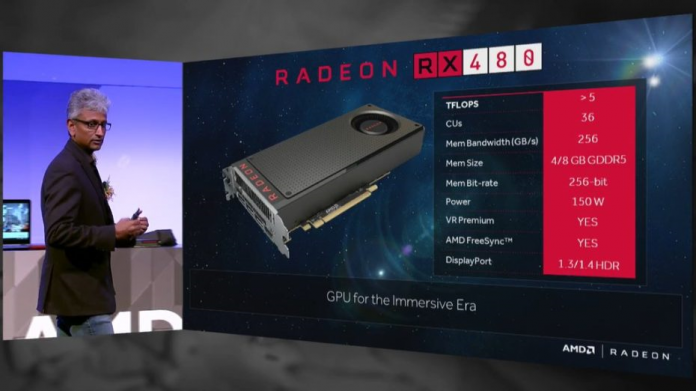 The microprocessor company announced its Radeon RX 480 graphics card at Computex in Taipei, Taiwan today. The Radeon RX 480 runs on AMD’s Polaris architecture, which features a new, smaller process that produces less heat. More graphics cards in the Radeon RX 400 series are likely to be unveiled in time, but by leading with the Radeon RX 480 – a card that doesn’t match the NVIDIA GeForce GTX 1080 or even AMD’s own Radeon R9 390X – AMD is making a series play to emphasise the low cost of its technology compared to the competition.

The arms race between AMD and NVIDIA has existed for some time, but the latest land grab is the future of VR. Commenting on the Radeon RX 480 unveiling were representatives of both HTC and Oculus VR, manufacturers of the HTC Vive and Oculus Rift respectively.

“We congratulate AMD for bringing a premium VR ready GPU to market at a $199 price point,” said Dan O’Brien, vice president of virtual reality, HTC.  “This shows how partners like AMD survey the entire VR ecosystem to bring an innovative Radeon RX Series product to power high end VR systems like the HTC Vive, to the broadest range of consumers.”

Price for entry has often been considered one of the biggest barriers for VR adoption, and with the announcement of the Radeon RX 480 AMD expects that affordable PC VR enabled by Polaris architecture-based graphics cards will drive a wide range of VR-ready desktops and notebooks, providing a catalyst for the expansion of the addressable market.

“We’ve seen an incredible range of immersive applications and game-changing experiences that have given millions of people around the world their first taste of virtual reality,” said Nate Mitchell, VP of Product, Oculus VR. “AMD is going to help drive that adoption forward even more by bringing their high-end VR GPUs to the $199 price point.”

AMD’s Radeon RX 480 is yet to have the full specifications revealed, though at present the company has stated that the graphics card will offer 5 TFLOPs processing power with a 1.08 GHz boost clock. An 8 Gbps GDDR5 memory clock, 256-bit memory bus width and 8GB VRAM position the card as a value for money product in a market were the next comparable is positioned at nearly twice the asking price.

The Radeon RX 480 will be available from 29th June 2016 – just two days after NVIDIA’s GeForce GTX 1070 launches – priced at $199. International pricing for the graphics card has not yet been revealed, but of course VRFocus will keep you updated with all the latest details.