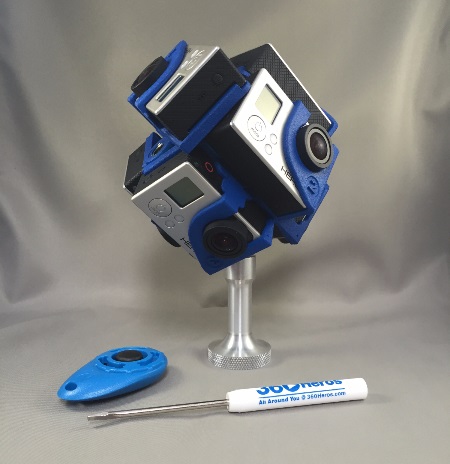 360Heros, a New York based  virtual reality (VR) technology company that offers a line of camera rigs that utilise GoPro cameras to shoot footage that is then stitched together to make immersive VR video for head-mounted displays (HMDs), has announced the issuance of a new patent. The patent covers the multi-camera 360 degree video holding assemblies the company has  been developing and sharing with content creators since 2012.

The US patent is for camera holding assemblies which hold multiple cameras in a preset, 360 plug-n-play orientation. The orientations falling under the patent feature 4 or more cameras held in a spherical orientation to create 360 degree by 180 degree videos and photos. The holders are designed to use GoPro cameras capture a fully spherical, seamless 360-degree field of view (FoV) video.

“This patent makes claims in connection with the 360-degree video technology 360Heros has had on the market since 2012. It’s been our goal since day one to create solutions that empower content creators to leverage existing camera technology to tell stories in a more immersive format,” states Michael Kintner, 360Heros founder and CEO. “We believe this patent simply legitimizes our initial goal and what we’ve been striving to accomplish for years.”

VRFocus will continue to follow the latest announcements from 360Heros, as details are released.