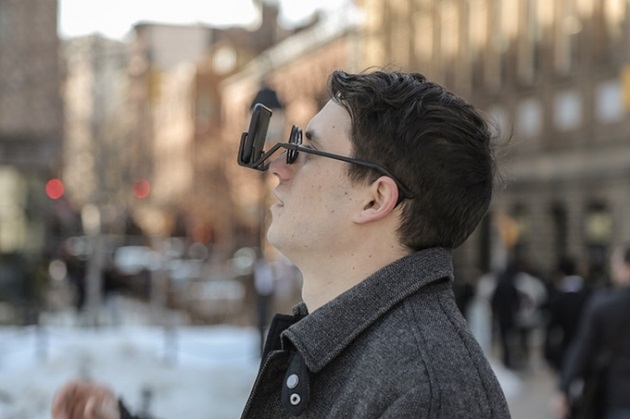 There’re more and more designs coming onto the market that aim to provide users virtual reality (VR) on the move. Where Google Cardboard allowed people to view VR on their smartphones, one of its main limitations has been its boxy design. Devices like Figment VR, Homido Mini and POCKEYES are all different versions of the same theme, mobile VR that fits in your pocket. Now there’s 2VR, with an idea to take mobile VR one step further, making it hands free.

Launching a Kickstarter crowd-funding campaign today, Stimuli is a New York-based firm looking to raise $30,000 USD for its product 2VR. While headsets like those previously mentioned are foldable devices to put in your pocket, allowing VR to be viewed anywhere they still need require users to hold their smartphones up to their face. With 2VR that isn’t necessary as the unit resembles a pair of glasses with a clip on the front to hold your smartphone. Working with screens from 4.7 inch up to 6 inch’s, you can view the same VR content as normal, just without using your hands.

Via 2VR’s funding page rewards start at $15 USD including the headset but quantities are limited. This then raises up several tiers at $17 USD, $20 USD and $25 USD for the final price. There’re also packs available with multiples of ten, fifty and one hundred 2VR units. For the single units US shipping is included in the price, but international orders will incur a charge.

VRFocus will continue to follow the progress of stimuli’s Kickstarter campaign, reporting back any further announcements.