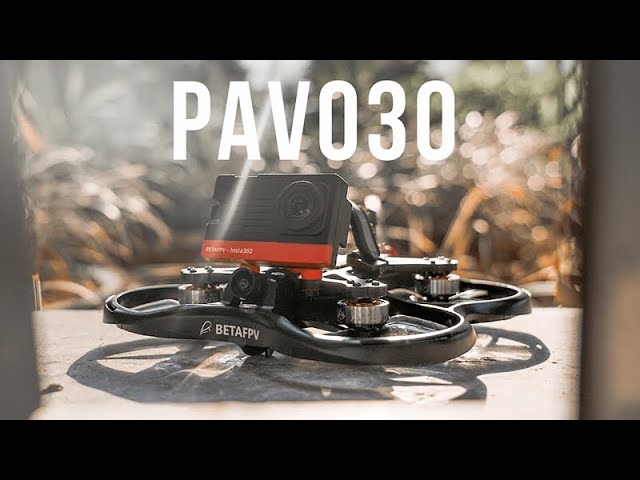 3-inch cinewhoops are among the most popular drones for cinematic FPV because they are compact enough to use indoors yet powerful enough to carry a GoPro.  Recently, some companies have produced 2.5-inch quads that still offer enough power to carry a naked GoPro while being more compact than a 3-inch cinewhoop.  But what if you could have the best of both worlds?  That seems to be the underlying premise of the BetaFPV Pavo30, a new 3-inch cinewhoop that looks like larger version of Beta95X V3 (with sleeker prop guards) and is the same size as some 2.5-inch cinewhoops.

In fact, the Pavo30 is even smaller or lighter than some 2.5-inch quads (I’ve included a couple of other 3-inch quads for comparison):

The Pavo30 uses an upside-down pusher design, which BetaFPV says puts the center of gravity closer to the middle of the quad.  And unlike many 3-inch cinewhoops that place the Caddx Vista toward the rear, the Pavo30 has it below the stack to further balance the center of gravity in the middle and also improve air flow to cool the Vista.  Pavo30 also uses props out orientation for less prop wash.

Pavo30 is available either with analog or DJI-compatible Caddx Vista digital VTX.  Unfortunately, the digital version uses a Nebula Nano camera instead of the Nebula Pro.  However, the kit includes a replacement frame that fits the Nebula Pro if you decide to replace the camera.

The Pavo30 uses an F722 35amp flight controller, with 6 UARTs and which can handle up to 6S of input voltage.  It also features a DJI 6-pin connector, so if you get the analog version, you can upgrade it to a digital VTX easily.

It is available with two 4S motor options, depending on whether it is analog or digital.  For the analog version, it uses 1505 3400kv motors with 1.5mm shaft hole and HQ75 5-blade props.  For the digital version, it uses 1506 3000kv motors with a 5mm shaft and Gemfan D76 5-blade props.  Albert Kim comments that 2004 motors would have been better and predicts that BetaFPV will eventually update this model with 2004 motors, in the same way that they updated the Beta95X V3 with 1404 motors instead of 1106 motors.

With its relatively light weight, BetaFPV claims flight times of 6 to 8 minutes, which is above average for an FPV quad, although I don’t know what battery capacity they used for that estimate.

The Pavo30 includes a pre-soldered power cable and dampened mount for Insta360 SMO 4K, which is a 30-gram version of the Insta360 One R 4K mod.  It can also be used with a naked GoPro with a 3-pin GH1.25  adapter, which is included in the package.

An improvement over the Beta95X V3 is the dampened mount.  With the Beta95X V3, the SMO mount consisted of three silicone rubber supports, and in a crash or hard landing, the SMO mount tended to pop off.  With the Pavo30, there are also silicone rubber supports to reduce vibration and jello, but there are also screws, so the mount won’t pop off easily.

Pavo30 is priced from $209 to $245 for analog or $309 to $345 for digital depending on the receiver (PNP, Frsky, or Crossfire).  Pavo30 is now available from BetaFPV directly and will also be coming to FPV retailers.

I’m very intrigued by the Pavo30 because of its small size.  I’m hoping it could offer the ideal combination of size and power for indoor FPV flythrough videos.  The built-in support for Insta360 SMO or a naked GoPro is icing on the cake.  I am wondering how well it will perform in the real world — will it be susceptible to jello for example? Nonetheless I ordered a digital version with Crossfire and will update this post when I receive it.