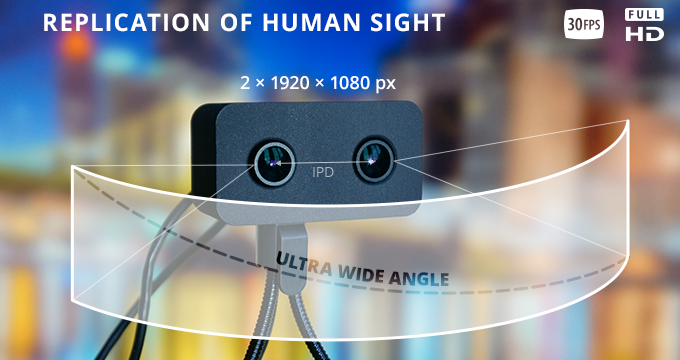 Virtual reality (VR) technology is bringing about something of a revolution in the camera sector. Capturing immersive footage for viewing inside a head-mounted display (HMD) requires more than your average camera can provide, leading to a flood of new products that include 360 degree and 3D capture among other features. Slovenian company VRfavs thinks it has spotted a gap in this market, however, with the web camera. Still commonly used to talk to people over services such as Skype, there’s no true VR solution for webcams yet. But the company plans to change this with Webeye VR.

Webeye VR captures footage at a 160 degree angle in 3D at 30FPS for viewing inside Google Cardboard, Gear VR and HTC Vive. It’s compatible with head-tracking in those systems, allowing you to look around the captured area. Of course, the HMD user won’t be able to stream an image of their own face back on the other line. It can also double as a traditional 2D webcam.

The 160 degree field of view (FOV) is a little less than VR fans are used to with these cameras, however. VRfans said of its decision: “We were supposed to use 180º fisheye lenses which bring enormous distortion on the edges. We won’t be able to recode 2 video streams to remove distortions with no latency. At this moment we are using the best available ultra wide angle lenses which don’t cause distortions. It’s important to realize that we are taking the very first steps in this world and the technology will get enhanced.”

Webeye VR is currently running a Kickstarter crowd-funding campaign, looking for some $40,000 USD to help bring the product to market. the campaign is currently offering 100 developer kits to arrive in April 2016 for $250, with a second development kit also on offer for $350 and due to arrive in August. The consumer version is also available for $320 and set to arrive in December.

Check back with VRFocus for more on Webeye VR.