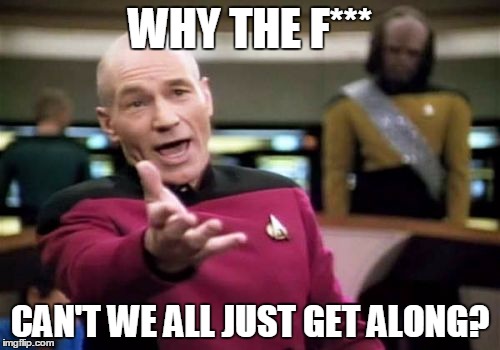 Welcome back to VR Vs where this week, if I’m honest it seems to me we’re in a bit of a holding pattern. Everyone seems to be biding their time a little at present, now that E3 is out of the way at any rate. The first wave of the second dawn (as it were) of virtual reality (VR) ends with the coming of PlayStation VR. The last of the four big names and the first specifically for consoles.

Sony Interactive Entertainment’s biggest problem of course is that it needs to convince people who bought a PlayStation 4 that they should now be buying a PlayStation VR. That’s a battle that will go on an on, although at least from my personal point of view they’ve been making a good (though not great) fist of it prior to launch. The other thing that this will bring in is that it will be the first console-based VR head-mounted display (HMD) under this new era. To some this is great, to others this is… not so great. You see for some (and please note I DO say some here) Sony coming in brings with it the word consoles and some PC gamers just don’t play that way. Consoles bring in console players for a start, who look at things in a special console-y way. Horrible creatures who spend their days screaming down chat services on Battle of Dutyfield, who use slurs and profanities as punctuation and pausing only to insinuate extracurricular activities with your mother. Consoles spread their console-y diseases such as ‘worse graphics’ and the dreaded E-word: exclusivity.

From the other direction you have the PC owners: the Master Race who never go outside for fear of melting (or worse) under the sun’s bright glare. A group obsessed with framerates over fun, fast food over movement and who love Minecraft so much jeez why don’t you just marry it already? Going through life blindly throwing money at their based God, the Lord Gaben and his mighty Steam machine.

Yes, the great PC vs Console debate will seemingly never die. The (no scope) sniping continues from each side, boasting that theirs is the true path to enjoy video games. That their way bring the best gaming experience and I’m sure if you’ve ever hung around a general gaming forum you’ll know that it can all get mighty vicious.

Regular readers of this weekly jumble of words will probably be thinking that this is roughly the point in a VR vs where I’ll go, “ah…” and launch into an explanation about what this all has to do with VR itself, and you’re correct in thinking so. For you see whilst we’ve had the Console Wara and the Console VS PC war we’re now moving into our own, decidedly uncivil PC civil war over VR. Trouble has been brewing for the last few months specifically and whilst the fuss caused over Oculus game funding (there’s that e-word again) certainly escalated things arguably the seeds of dissension were sown prior to this. But now between encampments of Vive and Rift users the battle lines have been drawn. The escalation on the war of words continues and we’re now at the point where the first question about a game is about what HMD it is on. This would be fair enough, however its starting to be the case that game announcements and news are shouted down if they aren’t on all the major HMDs and if they aren’t they then must be on the ‘correct’ HMD. This is especially true of games that are announced for Oculus only, as apparently all of these titles are now eternally tainted by Oculus’ money, whether they actually are financially supported by the company or not. Their developers have been bought and are a disgrace, etc, etc.

In either direction, whether it be Vive over Rift or Rift over Vive it could be the developer wanted to stick to one platform and get it right first. It could be they just didn’t have the finances to develop for two platforms. It could be they just didn’t have the development kit for the other or they could be sticking by the company who offered them the assistance and support to help them realise their dream. Of course that doesn’t mean that financial backing doesn’t happen. Exclusives do happen which sticks in the craw of the PC gamer because of the growing spectre of the walled garden. Segmentation amongst the PC. Because you should be able to play every game on your PC and this brings in limitations where there wasn’t before – except that is a nonsense and has never been the case. Everyone PC gamer owns a game they cannot play for some reason. Either it doesn’t like their PC for some bizarre reason or the PC doesn’t meet the hardware specifications of your own individual system. System specs are the walled garden you yourself control and one area where the consoles with their uniform setups have the leg-up.

The thing is it used to be we were glad for any new VR game title, any new developer support, any new creation that showcased VR to its limits because it and they were showing faith in the technology. The technology everyone wanted to succeed because they believed in it and the people trying to make it happen. For the platform holders that is still the case but we’re now at a point where, in amongst the ‘exclusives in VR’ debate I was told by someone they would rather a game not be created at all than a game be created that otherwise wouldn’t have been and it be on a platform they could not play. Yup, we’re at the point where ‘unless I can play no one can’. How desperately sad is that? And I worry at just how bad the situation is going to get once consoles join the VR party proper.

PC users don’t want a console-like ecosystem and a console-like atmosphere. They don’t want the Console Wars and they’re right. I mean, who would want groups of people splintering off into arbitrary camps, declaring everything not on their platform to be the worst things ever, openly hating on the opposition and-