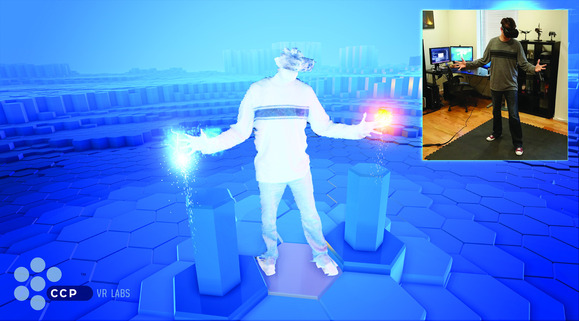 We are fortunate on VR Moments to have a large variety of virtual reality (VR) creators, developers and stakeholders join us and share with us their VR memories. Whether it is a moment of immersion when wrapped up in the relatively ordinary, or when your own videogame title scares the heck out of you. Today’s VR Moments comes a little closer to home though, being that it comes from myself.

To give a little bit of background here, being the ‘social media guy’ I’m not really privy to as much actual VR as the rest of the team.  You’re far more likely to see Kevin, Zeena or Peter at an event than myself – such as with the forthcoming E3. (*Sighs wistfully*) And whilst I seem to have acquired my own opinion column now in VR Vs – which I am sure you’re all reading, aren’t you? – I certainly don’t classify myself as a journalist. More a guy watching all this going on around him and raising a quizzical eyebrow occasionally. (I do quizzical eyebrows very well.) Besides, sometimes being a step back from all the action gives you a little more perspective on what is going on. Despite all this though, one of my first jobs for VRFocus was actually out on location and reporting on an event – Slush PLAY in Iceland.

It was a nice trip, and having spent the previous seven or so years working with journalists and fans in community management it was certainly interesting to see how the ‘other half lived’, as it were. As it turned out there wasn’t many VR related talks in the end, unfortunately. Of the handful that were scheduled one gentleman missed the event in order to be with his newly born child. Another meanwhile spent 20 minutes talking repeatedly about how VR wasn’t financially viable; telling devs who were working with VR that it was a terrible idea and insisting if you were involved in it get out now. Come the end of his ‘talk’ I was surprised he hadn’t begun marching up and down the stage with a The End Of The World Is Nigh sign. My fellow press folk in the balcony rolled their eyes as we looked at each other silently asking who this was. In the end I decided to make a break for it and see if I could get to one of the VR experiences that were in the building.

I’ll keep the story of my first VR experience until another day, as that is a story in and of itself and we will concentrated on my second trip into VR. Now the big attraction for those in attendance was a build of EVE Valkyrie which was generating quite the buzz. However my attempt to get on that was foiled by a large queue of other people who had clearly had the same idea. One thing that I did notice though was no one was really trying out the VR Labs project that CCP Games had brought along. So not knowing what it was, I joined the one-man queue and was soon trying to get an Oculus Rift DK2 to go over my glasses without destroying them. Quite a feat.

The scenario was that you were standing in the middle of a open plain filled with raising hexagonal towers, it reminded me at the time of something similar to the inside of Superman’s Fortress of Solitude. On one hand was fire, which you could dip your hand into and then hurl fireballs at the towers to destroy them. On the other hand was a source of electricity, which you place your hand in and power it up so you could shoot lightning from your fingers. Now I was standing in an area surrounded by people watching me and that is not something I’m personally comfortable with so the self-awareness of what was going and what people were seeing me doing was actually quite high. I began to overly worry about how my fireball throwing looked. Are people laughing? Did it look ‘manly’ enough? However this began to slowly melt away as I began to have more fun. Apart from the occasional fuzziness of the assistant coming into vision of the head-mounted display (HMD) I begun to really get into it. I didn’t care what others were seeing because there were no others. There was just me and the instructional voice in my ear. I began to take on the towers with gusto. They were my enemies. Why wouldn’t they stay down? I would make them stay down.  I simply forgot I was in a game. I began to experiment, trying different throws and gestures, combining both fire and lightning and trying to do as much damage as possible. The time seemed to absolutely fly by as the stage became littered with the rubble of my victims. Soon my moment passed as the countdown clock interrupted me, letting me know my demo time was coming to an end.

There was though one thing I’d not yet done and if my time was almost up I was certainly going to. I hadn’t used both hands in the same power. Would it work? Knowing what I wanted to do I dipped both hands into the electrical source and was delighted to find both emerged crackling with power. I looked over at the remaining towers and proceeded to yell – well, in my mind anyway – “UNLIMITED POWER!”. My best Emperor Palpatine impression sending lightning arcing from all ten fingers to decimate the field. I began laughing. This was nonsense. Glorious nonsense and I was sad to see it end.

With the DK2 off I saw that I had gained quite the audience and you know what? I absolutely did not care as the grin on my face clearly showed. I also noticed that queue had increased rather dramatically. Because if someone is clearly having fun who cares what you look like?

Whether you’re a creator, or just a VR enthusiast if you have a VR Moment you would be willing to share with everybody we’d be interested in hearing from you. Please send an email to us at community@vrfocus.com. We’ll be back next week with another memorable moment from the VR community, until then be sure to check out VRFocus throughout today and the weekend for more VR and augmented reality (AR) news stories and features.