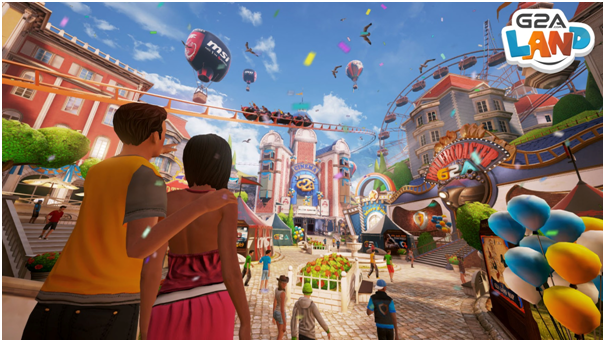 E3 has proven another busy time for virtual reality (VR) with many getting their hands on the technology for the first time. Elsewhere of course fans and developers have already been having their own VR Moments. Today’s is being shared by Nick Morey of Dynamo PR.

What is interesting about immersion in VR, is that despite there being careful considerations to take into account to make a simulation feel realistic, such as speed of movement, directions that feel natural, and use of audio, visual, and spatial queues for direction, there isn’t a necessity for ultra realistic graphics.

Such is the case with G2A Land. G2A.com are a client I recently started working with (full disclosure, naturally), and during a tour of their offices in Rzeszow, Poland, I got to visit their virtual theme park. G2A Land is a series of VR games and rides connected by a single hub/overworld, and is designed to be one of the most gloriously coloured and cartoon-like wonderlands you could experience.

They have the usual fayre you would expect, such as the classic rollercoaster simulation, and a shooting gallery, but the one attraction that really stood out for me was the Underwater World.

The experience was brought to life straight from the intro. With many VR tours, you are simply loaded up and then off you go, but in G2A Land, you actually have to find the attraction in the first place – signposted in the park – and then work your way through the twisting caverns to find the submarine to begin your journey, and this creates sense of intrigue before the ride even begins.

I found being in the submarine a little disorienting at first (perhaps because I’d experienced the rollercoaster a minute earlier). However, as I looked up at the surface of the water, bathed in sunlight, and watched it begin to disappear from view as I submerged, all notion of outside influences dissipated, and I did really feel that I was venturing in to something altogether more mysterious.

It started off innocently enough – some soothing synths, an environment not unlike a certain Pixar film about fish, and bursts of activity and colour had me craning to see all I could from the submarine windows. A slowly passing turtle or two brought a delicate charm to the already serene atmosphere.

However, after a minute or so of this, I began to feel a sense of build up – the subtle change in pitch, tone and environment lead me to understand I was about to discover something momentous, and perhaps a little foreboding. The water started to become darker, and as I went deeper, my sub’s torch started to come into use. Cue rising feelings of awe and dread.

Around the next corner of underwater rock, I was met with a temple, and a with a huge stone guardian at the entrance. It was at this point the size and scope of VR really dawned on me. At 5”9 (5”10 on a good day), I wouldn’t regard myself as short, however I felt completely dwarfed by what I was seeing. With a fixed screen, your perspective will always be skewed as you can look away from the screen and take yourself out of the environment, but as a headset creates the environment totally around you without outside distractions, there is the opportunity to make you feel small, insignificant, and embarrassingly, a little nervous.

Subtle on screen instructions guided me to shine a light on the guardian’s hands. This made me realise how few direct pointers there were in the simulation, and how effective subtle clues of direction can be when creating an immersive experience. As I did, the light spread throughout the door statue, and a door slowly came down, revealing an even darker underwater tomb.  Anxiety heightened, I allowed the vessel to continue, grateful for the fact the statue didn’t come to life. 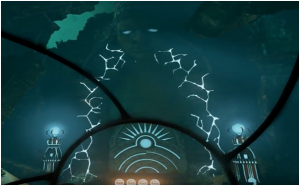 I was now really feeling a bit desperate to be closer to the ocean’s surface, as the environment grew darker, with sinister lurid algae and deepening piano music. I remember a heightened tension, and I looked behind me to inspect the rest of the compact sub for a moment of comfort, and the relief of not having to look out at where I was. Behind me was simply a couple of feet of empty sub, and a ladder. I was completely alone. This hadn’t crossed my mind yet, and caused me to dwell on my situation for a moment, and shudder.

As I went to calmly take a breath, the sub was smashed into by a giant undersea monster, accompanied by a terrifying crescendo of sound. Lights flashed red, a warning alarm came on, and control was lost. I started to drop straight down to the ocean floor, and crashed into the tomb ruins, cracking the protective glass of the sub, and causing smoke to stream out of the engine. 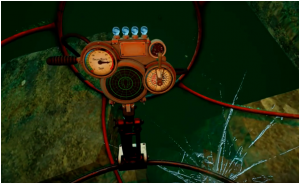 I was now completely immersed in the deep, with alien-like green and red thorny vines coming in and out of view in almost total darkness.  A smaller cavern had a similar, though less intimidating beast, swimming directly over my head, and I got to another entrance-like area for it to open out into another area in the temple. Too open, too exposed, too much.

At this point, I’m ashamed to say, as a sweaty, panicked mess, I chose not to continue and removed the headset. There, smiling at me on the sofa, completely unaffected, was the client, asking me enthusiastically what I thought.  I grimaced and said that it was a lot of fun, but I was feeling a little delicate. She laughed.

Later I was sent a video of the whole experience. I found out I stopped 30 seconds short of the 5 minute simulation. Kicking myself now, although at least I’m consoled by the fact that I didn’t have to endure the final face-on barrage from this monster: 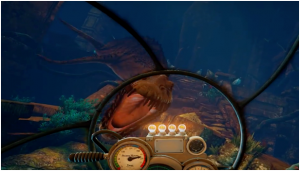