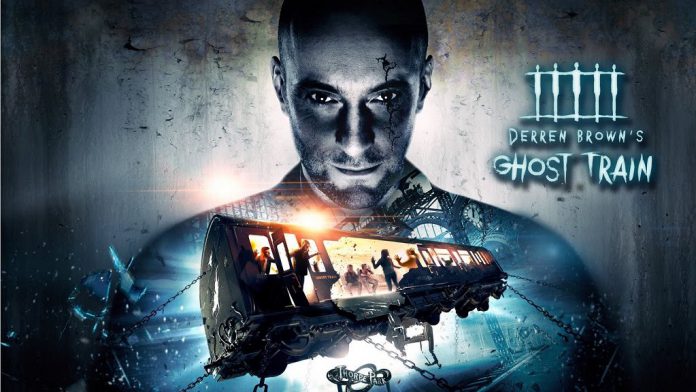 What do you do when the world twists and turns around you? What happens when you’re put in a position when, through the benefits of being in virtual reality (VR) and having that immersive sound and visual experience… and you no longer know what’s going to happen. What is the deal when VR presents you with an alternate take on what you saw without the head-mounted display (HMD) on? How long before you forget who else is there? And, even in amongst all that, can something more simple be more effective?

Yesterday I took a train, ironically, to take a train at the Merlin owned Thorpe Park theme park in the UK courtesy of an invite from HTC. Whose Vive HMD, (or, to be more precise the HTC Vive Pre) was being used as part of Thorpe Park’s latest attraction the Derren Brown re-imagined Ghost Train. Fans of Brown’s work will not be surprised to know that the ride is as much about subverting your expectations of being on a ghost train as it is about the experience itself. Now one of the things that came from the event and is asked of those who go on the ride is to ‘keep the secret’ and not reveal everything that goes on as, naturally that dilutes the effectiveness of the immersion and spoils some rather effective surprises. So for my moment of VR immersion I’m going to be a little more vague on the details than I would normally to avoid spoilers. However, VRFocus will be bringing you a more in-depth feature discussing the use of ‘event space VR’ within the theme parks and other entertainment attractions.

So instead let me focus on one take home from the ride: that sometimes the most effective thing isn’t the ambience, or the story, or the graphics. Sometimes its that primal feeling of your personal space being invaded. Whilst on the train at one point you have a rather close encounter with a particularly hellish creature – and it was the point I momentarily forgot at a base level that I was on a ride. The monster looms over you and gets in nose-to…whatever it had that passed for a nose. At that point my brain at least, because it wasn’t expecting it, went through a sort of emergency list of things I should do. I’m in a seat so I can’t move backwards, which effectively rules out a lot of the list. My subconscious though recalled something, an almost throwaway line amongst the noise at the beginning, about not breathing. Why? Because the things below could see you if you did. So that’s what I did. I didn’t breathe. I held my breath until the entity, let’s call it, went away – and it was only after I exhaled that I realised I’d been holding it at all.

Ultimately you don’t need the best graphics in the world to be immersive. Sometimes you just need to push the right buttons.

VRFocus will be back with another VR Moments soon, be sure to check back with us throughout the weekend for more stories, videos and features.