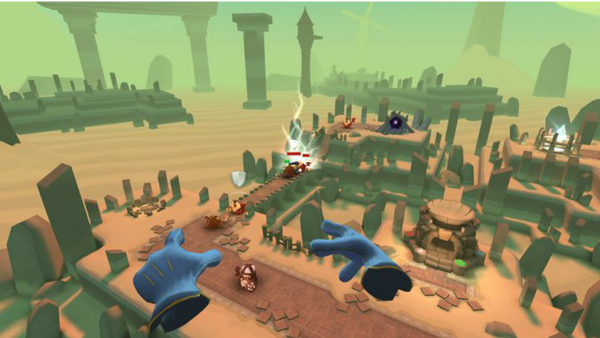 Earlier in the year Oculus VR ran a virtual reality (VR) development jam for the Gear VR mobile-based head-mounted display (HMD), which was made in partnership with Samsung. The competition led to numerous new videogames and experiences for the hardware including Atop the Wizard’s Tower from Defiant Development. This unique strategy title went on to secure a Bronze award in the videogame section of the jam and has this week finally launched in full for the consumer version of the Gear VR.

As the name suggests, Atop The Wizard’s Tower casts players as a wizard that must defend his people from attacking forces. This players out as a Tower Defence title in which the wizard utilises the elements to attack. There are four element types that can be combined with towers or used to spawn defenders.

Atop The Wizard’s Tower costs $4.99 USD. A Bluetooth Gamepad is not required to enjoy the experience. It arrives in time for the launch of the consumer Gear VR in the US, which went on sale on 20th November 2015. It’s not yet clear when the device might be arriving in other territories.

VRFocus will continue to follow any and all experiences for the Gear VR, reporting back with the latest updates on them.