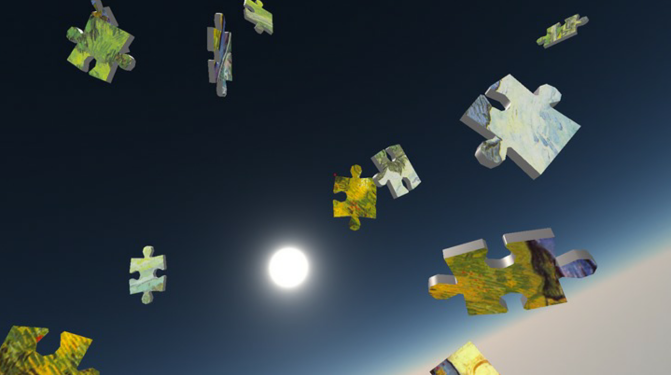 World renowned artist Vincent Van Gogh already serves as the insipiration behind one of the Gear VR mobile-based virtual reality (VR) head-mounted diplay’s (HMD’s) defining experiences. The Night Cafe, as the piece is called, reflects the painting of the same name and allows users to explore a picturesque scene within VR. The experience was so compelling it won Oculus VR’s 2015 mobile jam.Clearly not content with just the one experience, Van Gogh returns to Samsung and Oculus VR’s device this week with Starry.

Developed by DJH, Starry is a puzzle-based videogame that’s quite literally based on puzzles. You connect pieces of puzzles together, eventually forming some of the works from Van Gogh himself. The developer claims that presenting these puzzles in this way will immerse players in the “artistic spirit” of Van Gogh’s work.

There’s currently no word as to if it could come to other HMDs such as the Oculus Rift or HTC Vive later down the line. “This VR game stands out from its genre by providing you the experience of taking deep thinking, and enjoying the calm in the present moment,” an official description for the title reads. “Also, while making full use of VR technology, this game does not offer any dizzy feeling. Try restoring Van Gogh’s masterpieces through your virtual hands instead of traditional way of clicking and dragging!”

This could well be VR’s first true puzzle game, something that the developer may want to look further into in the future. For now, though, there seems to be plenty to enjoy here. The experience is priced at $2.99 USD and does not require a controller to be played.

For the latest releases for Gear VR, Oculus Rift, HTC Vive, PlayStation VR and all other VR HMDs, check back with VRFocus.