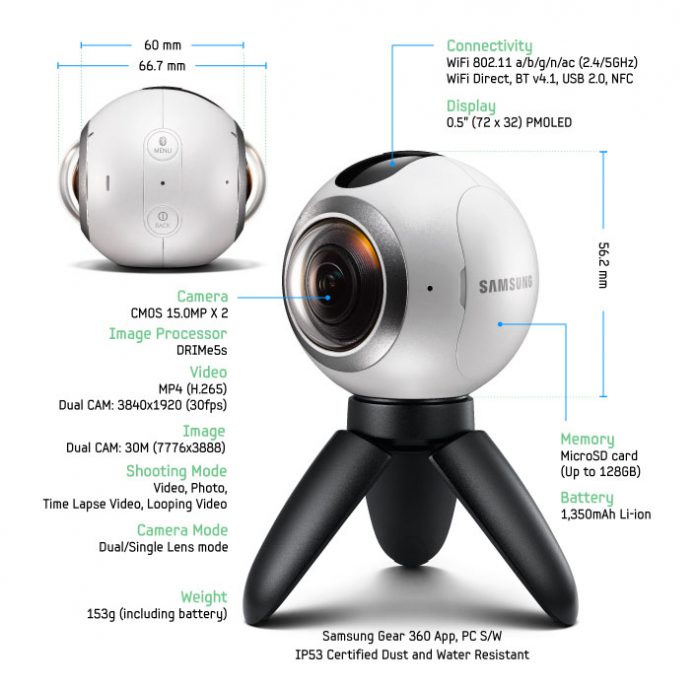 Samsung is taking a big step forwarded into world 360 video today, announcing a brand new camera focused at the average consumer named Gear 360. The kit is set to co-exist with its upcoming Project Beyond, a 3D VR rig that’s aimed more towards the professional market. It was already known that kit would be arriving in Q2 2016, but now the official price for the device has also been revealed along with a spec sheet, which can be seen below.

The Gear 360 costs just $99 USD, which is extremely competitive when stacked up to other products on the market. The move is actually reminiscent of the release of the Gear VR head-mounted display (HMD) itself, which also cost $99. For $198, then, consumers could have a Gear VR and the means to capture 360 footage to view on the device.

As for the specs, you can learn much more about the Gear 360 in the image below, which reveals the device features two 15 megapixel cameras that capture in 3840 x 1920 in 30fps. There’s obviously video and photo modes as well as time lapse video and looping video options. A single lens mode is also available and the device weighs in at 153g. A MicroSD card slot can accommodate up to 128GB of memory and the kit boasts a 1,350mAh Li-ion battery.

Stay tuned to VRFocus for the latest updates on the Gear 360.

UPDATE: The price listed in this article was taken from an official Samsung website, though it appears to have now been removed. VRFocus has contacted Samsung for comment.