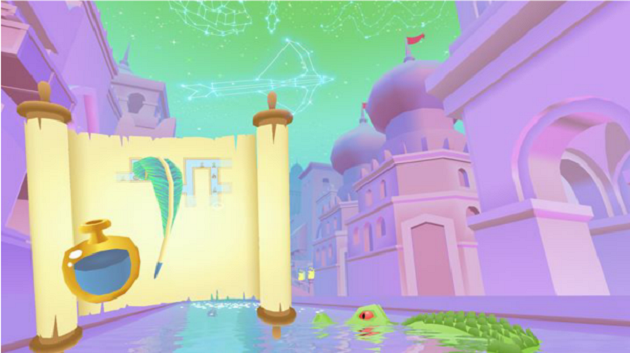 Following the successful release of Temple Gates Games’ first virtual reality (VR) project, the Oculus Gear VR Game Jam finalist Bazaar, the studio is looking towards the future. In a recent interview with VRFocus, Creative Director Theresa Duringer hinted at some of the projects the studio may be working on, with a strong emphasis on multiplayer experiences.

“We’ve been working on Bazaar, but we have a couple of other projects in the pipeline,” stated Duringer. “We have a multiplayer game that is a jousting game, and it’s really fun; sort of Day of the Dead themed, where you have a skeleton horse and you’re a skeleton and you’re riding along jousting. There’s a fun physics thing when you’re jousting at your opponent: if you hit them right all their bones will fly around and you’ll get points based on the bones bouncing and hitting the audience. A big fun explosive moment.”

A jousting experience such as this could work well as both a solo or multiplayer experience, but it’s obviously that latter that Temple Gates Games is most interested in working with. Further discussing the studio’s existing prototype work, Duringer continued to explain the team’s reasoning:

“We’re working on some asymmetrical gameplay, too, using different kinds of headsets and doing more multiplayer games… one of the things for us is that VR is really isolating, and one of the ways you can have that connection with other people and have that magic is by bringing other players into the game. We want to push in that direction a lot.”

It’s not yet been confirmed whether either of these projects will see release, or if work is still continuing on them. However, given the success of Bazaar many VR enthusiasts will be keen to learn that Temple Gates Games has already begun work on a second title made specifically for this new medium. VRFocus will bring you more coverage of Temple Gates Games’ work, including the full interview with Duringer, later this week.