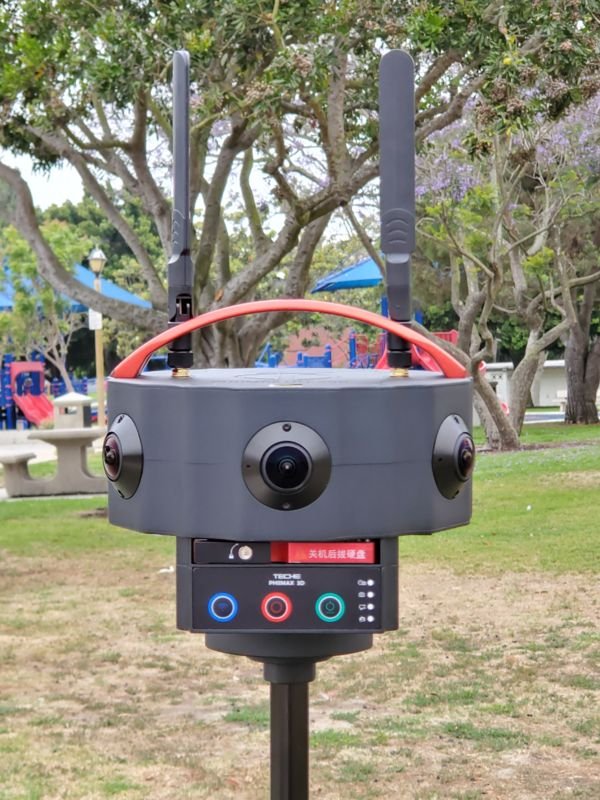 Here are the specifications:

As noted in the table, it has the option for live streaming and realtime stitching (at 4K resolution).  It can also shoot at 120fps although I don’t know at what resolution.

An unusual aspect of the camera is that it has no fans and no vents.  Instead, it uses a fully sealed, all-aluminum enclosure to dissipate heat.  Teche claims the Phiimax is actually waterproof and dustproof.

Teche sent a unit to me for testing and here are my first impressions.  The Phiimax is about the same size as the Kandao Obsidian and feels very solidly built.  It has a distinctive red handle on top with a 1/4-20 hole in the middle such as for a microphone or LED light.  Like the Insta360 Pro 2, it has two removable antennas to improve the Wi-Fi signal.

Below the unit, there are several ports: an HDMI 2.0, ethernet port, 3.5mm jack, a port for the included GPS antenna, and for the 16-pin power adapter.  The Phiimax uses a 3/8-inch tripod hole.  The kit also includes a 3/8-inch extension rod to act as a spacer for your tripod.

One thing I appreciated was the storage: it uses standard SATAIII SSD drives that can be easily inserted into the camera.  The camera bundle includes a SATA to USB adapter to connect the drive to your desktop.  There are screws around the lenses that seem to suggest that the lenses and/or cameras are replaceable.

The Phiimax 3D has a sealed body made of aluminum alloy (even the battery is not removable).  It has a fanless design and instead uses the aluminum body itself as a passive cooling mechanism.  The result is that it is completely silent.  Teche also claims the Phiimax is dustproof and waterproof.  However, because the body acts as a radiator, the body can become hot and there’s a sticker warning about that.

Below the lenses is the control panel, which is simple and intuitive but has limited controls.  Instead, the controls are in the smartphone app (currently available only for iOS).  The startup time is not too bad at around 30 seconds, similar to the Insta360 Pro 2.  I was able to connect wirelessly to the iOS app called Teche Central without too much trouble (default password is teche720 ).

The app has a straightforward interface.  You can see a live view in equirectangular mode with a pretty good refresh rate.  I like the fact that you can put an overlay on the live preview to show you where the stitch lines are.  The app has full manual exposure for both photos and videos, plus shutter priority, ISO priority, and exposure compensation up to +/- 5EV.  However, I noticed that even -5EV wasn’t very dark, so the exposure compensation might not be standard.  I will be testing this further.  I also saw that the current version of the app does not yet have an option to capture photos in 12K.

I haven’t had time to stitch the test shots yet but so far the unstitched files look very promising.  The video from each lens looks detailed, with good dynamic range, and has a resolution of 3840 x 2880 at 30fps with 93mbps bitrate.  The view is wide enough that there is plenty of overlap between the lenses, so I’m expecting that stitching will be good.

Here are sample videos from the Phiimax.  The videos are in 8K 2D 360 and show excellent detail and dynamic range.

The Phiimax is available directly from Teche at 35,800 RMB (around US$5340).  The price includes the stitching software.