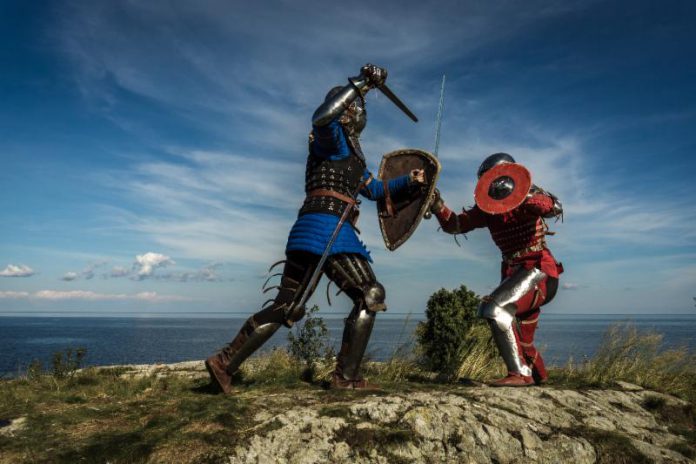 San Francisco-based virtual reality (VR) production studio Spherica has been developing its own 360-degree camera that is fully stabilised, able to create smooth level footage whilst in motion. Using the camera the company has filmed Immersive Combat a live-action combat experience that will premiere at the Virtual Reality Los Angeles (VRLA) expo this week.

Immersive Combat is the first in a series that will take viewers into the heart of the battle as Kung Fu, Muay Thai and Medieval Combat world champions fight it out in a mixture of themed worlds including Vikings and pirates, steampunk and cyberpunk.

“When creating “Immersive Combat”, we wanted to push the boundaries of cinematic VR – to show the true power of the medium. Our goal was to give the audience the kind of experience simply not possible in the ‘physical’ world – such as flying over pirate ships, being locked in mediaeval sword fights or being pulled underwater during Viking battle – and immerse them in these fantasy worlds to a degree impossible with any other technology,” said Spherica founder Nick Malukhin. “In order to produce this fully immersive VR experience we had to fight the limitations of today’s cinematic VR. So, we developed a line of proprietary hardware that enabled us to move the camera throughout VR production just as we would in traditional filmmaking. It’s a game-changer for the user experience.”

A VR trailer for the upcoming series is currently available on the Samsung Gear VR, the film will then release later this month through a dedicated Immersive Combat app.

Spherica production team is set to release more than a dozen live-action VR films from the series in 2016.

Immersive Combat isn’t the first use of Spherica’s 360-degree filming technology, its been tested on several VR projects, including those created by the Associated Press  and HuffPost RYOT.

For all the latest VR news keep reading VRFocus.