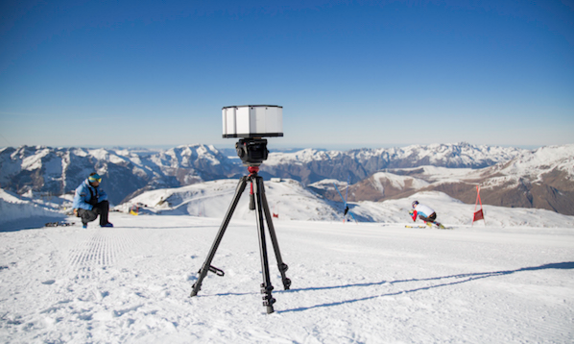 360 degree video is becoming a compelling and popular medium for use with virtual reality (VR) head-mounted displays (HMDs), though major progress still needs to be made. One area that’s in need of improvement is resolution, as crisper images go a long way to helping the viewer believe they’ve stepped into the world that they’re seeing. With that in mind, Sony has this week revealed a small 360 degree project that was shot in 4K using 12 of its latest 4K smartphone, the Xperia Z5 Compact, with the help of immersive media company REWIND.

The 360 degree YouTube video is below, though obviously for the best experience viewers should head to the YouTube app on the Android operating system and watch it through the lenses of a Google Cardboard DIY HMD, ideally using the Xperia Z5 or its Compact version for the full 4K experience. The 12 handsets were fitted to a custom 3D printed rig in Les Duex Alpes, France during the Rise Ski & Snowboard Festival. A number of scenes were shot using this set up, forming the short video in which viewers visit mountain peaks and ski slopes.

REWIND MD Sol Rogers explained how the project came about to VRFocus. “REWIND was approached by Sony to tackle an ambitious, innovative R&D project,” Rogers said in a statement. “The challenge was to use the amazing 4K camera system on the Xperia Z5 to create 360 footage for use on Virtual Reality headsets. We used our specialist knowledge of 360 and virtual reality production to design and manufacture a custom camera rig to hold all of the devices in perfect alignment.”

He continued, explaining a bit about the process of making this experience: “Utilising the latest rapid manufacture techniques we created the system within a short period of time, whilst still making it robust enough to withstand the harsh conditions in the French Alps. We then stitched together the footage from each of the 12 phones to create the first ever piece of 360 content shot on mobile. The fidelity and quality of the 4k camera sensor, in conjunction with good quality lenses, gave an excellent result when stitched together into 360 video footage. We feel that mobile camera technology has come to a point where it could have a serious future in 360 immersive filmmaking.”

Both the footage and the rig can also be seen at the 2016 Consumer Electronics Show (CES) in Las Vegas, Nevada this week. Sadly, Sony’s own VR HMD, PlayStation VR, doesn’t appear to have much of a presence at the event.

In the past Sony has teased that it could be working on its own VR platform for the Xperia Z5 series, though such a product has yet to materialise. As for REWIND, the studio recently worked with the BBC to deliver another 360 degree experience based on the ever-popular dancing competition series, Strictly Come Dancing. It’s also working on its very own VR videogames, including Pane in the Glass, which is on its way to the HTC Vive in the near future.

The post Sony Uses 12 of its Xperia Z5s to Capture a 4K 360 Video appeared first on VRFocus.