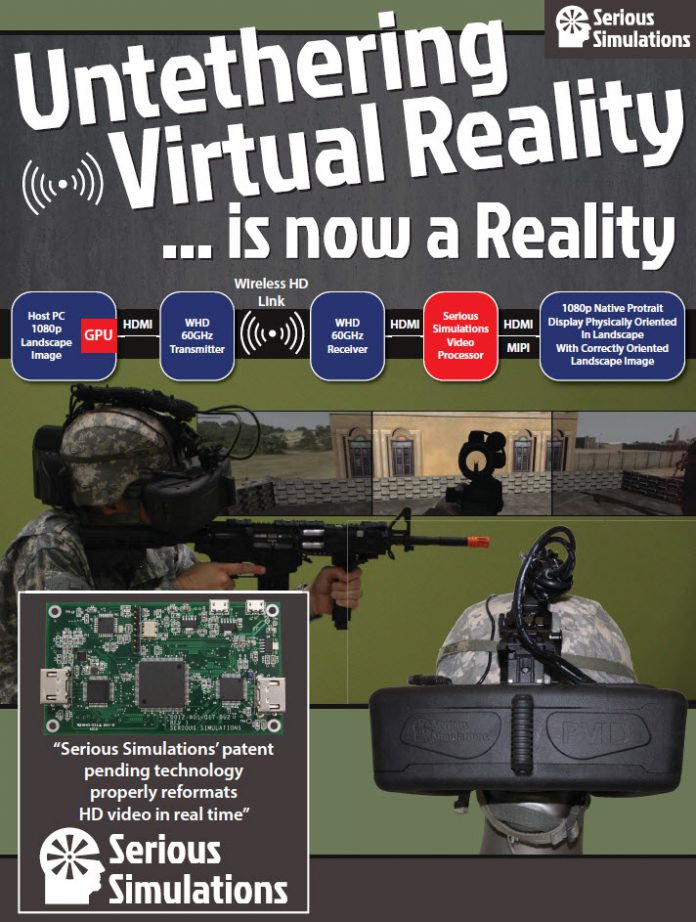 The patent pending wireless VR processor features a two-step process, that manipulates simulation/game video streams in the GPU by conducting pre-wireless transmission image processing. The wireless transmissions are sent in landscape mode only, so upon reception by the headsets receiver, the Serious Simulations specially designed “reformatter” device re-organizes the pixels on-the-fly for delivery directly to the display screens.   The process works for all high resolution displays such as the LCD, LED, OLED, and AMOLED screens claims the company.

“While designing our wireless head/helmet mounted displays using high resolution small format cell phone/tablet displays, we found it necessary to innovate a new approach to overcome the significant processing delays that existed between wireless transmitters that are natively landscape devices, and cell phone displays that are natively portrait devices,” said Christopher Chambers, Co-Founder and CEO of Serious Simulations in a statement.

Serious Simulations claim the speed of the device is such that it takes less than 20 micro-seconds to deliver the first pixel of the wireless image from the GPU to the screen, and actually gains speed during the process.

“This method is so fast it is literally a zero-frame latency procedure, and is essentially a zero-time latency procedure. Eliminating big chunks of latency greatly improves the VR experience, enhances the suspension of disbelief for better training or entertainment, and greatly reduces the chances of trainee or player discomfort.  Our goal is to advance the notion that high resolution wireless VR displays can and should be as efficient as wired VR displays. It really is time to untether the VR user community,” adds Chambers.