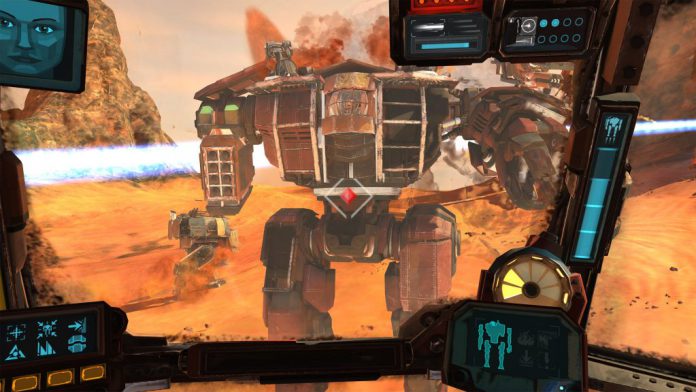 When we said that Vox Machinae has been flying flying lowest under the radar, we weren’t joking, but now after six months there have been a few more bits to be seen from this title.

Space Bullet Corp, developers of Vox Machinae, has been posting a series of gameplay moments from spectator mode. This includes mostly massive robots getting shot at and obliterated – and the art is still as impressive as it was at the beginning of the year.

The first video shows the absolute carnage that each of the mech can sustain during gameplay from the use of weapons, whereas another shows explosions and defeat as a result of physical impact and collision. It also seems that players will be able to eject from the robots when they are about to die. The latest video shows a robot being taken down by an army of varied enemies.

Vox Machinae is described as a “modern take on mech combat simulators of olden days”, where the player is one of the few certified pilots left after the Earth’s resources had been depleted you fight to survive in one of the few jobs that are left. Players can pilot robots, navigate hostile planets, customise armour, punch with giant robot fists, and experience immersive physics.

This is just something new to be added to the previously officially released gameplay trailer, but there still hasn’t been a date set for the release of Vox Machinae. There is, however, a small hint in the description of the gameplay trailer from earlier this year where they claimed they are committing to a 2016 release, and there are still plenty more months to hear more about the title. Either way, the gameplay and design looks pretty great.

The title will be available on the Oculus Rift when released as it has been previewed on the head-mounted display (HMD), but it is officially classified as a PC platform, so it could perhaps open up for HTC Vive compatibility, but this has not been confirmed.

Until then, VRFocus will continue to keep up with the developments of Vox Machinae, as well as all the latest news, updates, and features in the world of VR.