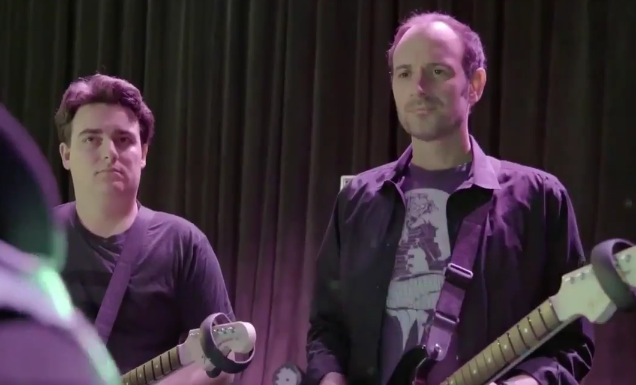 2015 is winding down, but Oculus VR has managed to sneak in at least one more major reveal for its Oculus Rift virtual reality (VR) head-mounted display (HMD) this week. The company has announced Rock Band VR, a spin-off of the beloved music franchise that’s in development over at series creator Harmonix. Oculus Rift creator Palmer Luckey announced the news in style at The Game Awards and, as you might expect, also confirmed that the title will only be coming to the company’s PC-based headset. In fact, the Luckey has also gone into detail about why that is.

In an announcement tweet, Luckey noted that Rock Band VR is “Coming next year, only on Oculus.” When one follower reacted somewhat negatively to the exclusivity news, the Oculus VR Co-Founder simply replied: “We funded it, we produced it, and the hardware interfaces with our tracking system. Expecting it everywhere is unreasonable.” This practically eliminates the chances of seeing Rock Band VR come to the HTC Vive and PlayStation VR HMDs, then, though it doesn’t rule out Oculus VR’s mobile-based HMD, Gear VR.

This isn’t surprising given that the announcement trailer for Rock Band VR was handled by Oculus VR and even suggested that the title will be compatible with the Oculus Touch position-tracked controllers. In the image above, these devices can be seen hanging from the stocks of the plastic guitars used to play the title. It seems that, with this system in place, players will be given full control of their instruments as they immerse themselves in a live show. It remains to be seen if the title will also support Rock Band‘s drum and microphone peripherals.

That said, Harmonix itself isn’t working exclusively on the Oculus Rift; the company is also bringing its music visualiser, Harmonix Music VR, to PlayStation VR on PlayStation 4. VRFocus will continue to follow the company’s work in VR closely, reporting back with any more updates.

The post Rock Band VR is Exclusive to Oculus, ‘Expecting it everywhere is unreasonable’ appeared first on VRFocus.