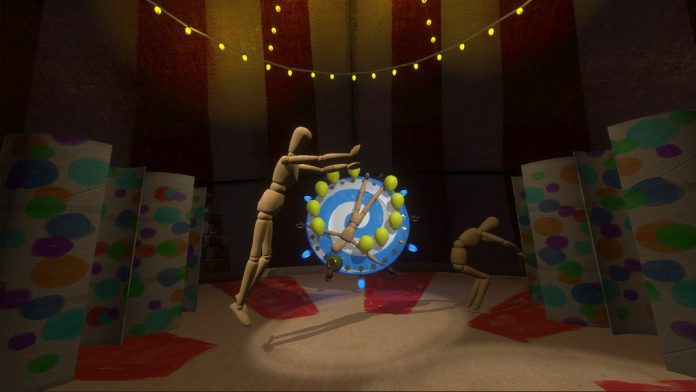 The HTC Vive head-mounted displays (HMDs) Room Scale tracking system allows for really in-depth immersive entertainment; with some content get players involved as much as possible. This is the case for Felt Tip Circus, a title from collaborating developers Alpha Wave Entertainment and AAD Productions, which features a set of easy to pickup mini-games all set inside a big-top tent for the aforementioned circus.

Felt Tip Circus begins in an ordinary living room with lots of small circus toys surrounding your feet. Some of these can be interacted with – picked up and thrown around mainly – with a TV acting as the graphical and sound options menu. Entering into the main videogame itself takes you to a brightly coloured ticket stall, giving you options to select three out of the four mini-games available, with individual difficulty settings – Easy, Medium, Hard – available for each one.

In the same area you can choose how many players are going to be involved, Felt Tip Circus is all about local party play. There’s a single player if you’re on your own but adding friends to compete against is where you’ll get the most enjoyment out of the videogame. You’ll take it in turns and see who can achieve the best score; this is where the longevity of Felt Tip Circus lies.

The four mini-games; Lion Tamer, Acrobatics, Highwire and Knife Throwing are a great showcase for the range of movement and control which the HTC Vive motion-controllers provide. The Acrobatics game is probably the best example of this: with one controller you move a big lever on the floor to switch a seesaw between various positions to get tumbling mannequins to land on one end. While the other controller acts as a sort of hammer which you use to hit the other end of the seesaw and send the mannequins flying. When it really heats up it’s a frantic few minutes of gameplay.

The whole idea of Felt Tip Circus is great, especially as an introduction to virtual reality (VR) and HTC Vive for first time players. It’s after you’ve played it a few times that Felt Tip Circus starts to lose its shine. While you can essentially count twelve playable options between the three difficulty levels and four games, you’ll get through them quickly and then it just boils down to a party title that will be fun for a while. 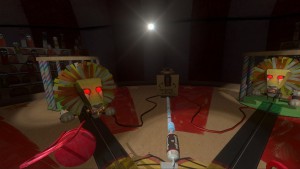 There’s only so many times you’ll want to catch multicoloured balls on a highwire to put them into a corresponding cup, or throw spiked balls at a spinning disc with balloons on it. Even with the variations between the difficulty levels, there’s not enough of it to add to the longevity, a couple more games would’ve certainly helped.

On the outset Alpha Wave Entertainment and AAD Productions have created an amusing launch title in Felt Tip Circus. It’s a bold, brash and enjoyable party videogame that’ll have you laughing with friends. But it’ll be left by the wayside within a short period of time as there’s little to draw you back which is a shame, as it works so well in VR.